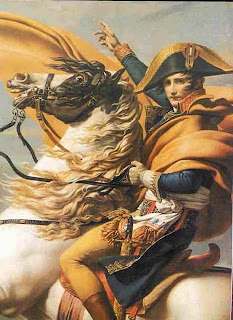 This article motivated me to interview Napoleon I Bonaparte. I'll admit, the emperor appeared woozy about being questioned for my blog, but I assured him that I wasn't seeking musical expertise; just answers regarding leadership. After making my pitch that a professional orchestra is like a battlefield, Napoleon agreed to be interviewed. Perhaps his perspective on power might enlighten us during these chaotic times.

MKT: I know, Emperor Bonaparte, that the orchestral world is foreign to you, but I'll bet if you observed a music director's role, you'd sense a certain kinship as emperor. A search is in progress for a new music director; a successor to a local orchestra. The process is being headed by a committee.
N.B : Well, that's silly.
MKT: What do you mean—silly?
N.B: There can be only ONE leader. Committees are ineffective. They're composed of dullards that slow down a process to the point of stagnation; timing is everything. I believe in swift action.
MKT: Early in your career, you were respected, not only for your successes in the battlefield, but for your diplomacy skills—
N.B (laughing): It was a matter of knowing the right people at the right time.
MKT: Then you became a tyrant.
N.B: You mean, strict. There's a difference. I believed some of my best performers were cut out to make great leaders. Perhaps I miscalculated. In war, everything is perception—perception about the enemy, perception about one's own soldiers. I'd suspect the same for music directors and their musicians, correct?
MKT: I'm asking the questions here. Was your marriage to Josephine a happy union?
N.B: Oh my dear, the betrothal to Josephine was a tactical move; an opportunity knocking at the door. You should know better than to ask. I was never at a loss for, how do you say? Drop-dead gorgeous ladies. I spoiled them with fur coats of many colors, diamonds, and other lavish gifts.
MKT: What's your true feeling about religion?
N.B: Religion? A means to an end. I surprised the English by occupying Egypt. In the meantime, I studied the Qur'an, and learned the laws of the land. I became as one with the Muslims, as I did the Jews. Clever?
MKT: Why did you turn from diplomacy to tyranny?
N.B: My armies grew too large and too fractured. I had to rein in the little guys. They were the loudest complainers and whiners. I should have poisoned them all, as I did with the plague-stricken ones after the battles with the Ottomans.
MKT: Do you still believe in micromanagement?
N.B: Indeed. As the Supreme Leader, it was my duty to make all decisions.
MKT: And what about the effectiveness of espionage?
N.B: A necessity. How else can one know what the opposition is plotting? In your world, the internet is perfect for tracking that sort of thing.
MKT: Tell me about the Russians. I thought they were, at first, your friends.
N.B: Yes, initially I thought so, but they got me in the end. Not only did the Russians carry on a scorched earth campaign, but they poisoned me. You thought I died from stomach cancer? It was— Arse-niks! The Slavs should all be made into slaves!
MKT: I can't help but ask this. What was not to love about your home in the Island of Elba? I mean, you were granted the title emperor for life, right?
N.B: I suppose. Elba was a pretty place but ever-so-boring. What was I supposed to do? Just sit around, admire the view, eat bon-bons and sip champagne? I prefer the taste of blood and battle.
MKT: You were defeated at Waterloo, weren't you?
N.B: I refuse to divulge family matters.
MKT: As I mentioned, a local orchestra is on the look-out for a new music director. Everyone seems to have an opinion as to a successor. And yours?
N.B: Open your history book, my dear. You may learn that I abdicated to my son. Nothing like nepotism, as a rule. Any other questions, Madame?
Posted by kransberg-talvi at 12:53 PM