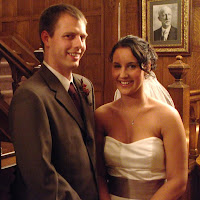 It was a far cry from the way Ilkka and I got married, that's for sure. Last Saturday evening, our twenty-two year old daughter, Anna Mirjam Talvi, was betrothed to Andrew Michael Blick after a courtship of over three years. Anna and Andrew hosted a beautiful, non-traditional ceremony at the Roeder Mansion in Bellingham with a small circle of dear friends and family in attendance. As Anna made her way down the staircase into the gathering, there was an audible gasp from the audience. To my eyes, there's never been a more magnificent bride. If my mother were still alive, she would have kvelled at the sight of her grand-daughter. Perhaps Anna has a sixth sense. Her grandmother had visited in a dream, and appeared to her brimming with joy and excitement for the sacred event.

Native American prayers and Jewish meditations of Kabbalistic origin helped to create an illuminating, spiritual experience. The ceremony was further enhanced by the musical poetry of violinists Rose McIntosh and Alyssa Fridenmaker. A dessert reception followed with a charming and captivationg toast by the father of the bride, who, I might add, appeared radiant. Seated by our side during the ceremony was our dear friend, retired Seattle Symphony violinist, Karen Bonnevie. Karen hosted the baby shower before Anna's birth back in 1987, and has watched over our family all these years. She is also Anna's chosen Godmother.

Our girls, Anna and Sarah, have always enjoyed hearing the tale of our own unconventional wedding,  especially since our reception consisted of a trip to Carnation's, the ice-cream parlor. Ilkka, rather than popping the question, made a proclamation that we would be married when I turned twenty-five. And so, after a grueling recording session in Los Angeles (our wedding was set for eight o'clock in the evening, but due to over-time, we didn't make our appearance until after ten) we tied the knot. Our event was witnessed by four people: the pastor, my late mother Fran Kransberg, and Ilkka's two daughters from his first marriage. I still remember the taut smile on my mother's face; the look of anxious resignation at the thought of losing her fourth daughter, the baby. She herself had been married for thirty seven years before being jilted by my father. I suppose my mom had lost faith in marriage for a while, and trust in the male species. But a few years later, when she laid eyes on Anna, she shook her head and said, "It's meant to be." 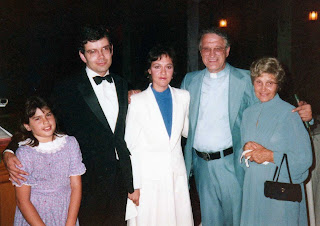 Pastori Lehti, a friend to the Finnish community, performed our service with soft spoken dignity. He warned that marriage "for better or worse" is not so difficult when times are good. But when life throws a curve for the worse, he said, that's another matter. This is when marriages tend to fall apart. Devotion, emotional maturity, and inner strength are ingredients for a solid marriage; wisdom which has been embedded into my heart forever. And in turn, I'd like to pass this recipe along to my Anna and Andrew. May their lives be filled with joy, blessings, and devotion to one another at all times.

Posted by kransberg-talvi at 12:22 PM No comments:

A Lesson From Marylou

After reading these enlightening words of Boston Symphony violinist Marylou Speaker Churchill who passed away a few days ago, I feel at once inspired and saddened. Speaking about the work of an orchestra musician, she asked: "Is playing in an orchestra a joy or a job? It's wise to make it a joyful job, but remember that no job employs you completely. Working for money is never the real reason for doing any job. You must love what you do, and then you will find happiness and joy in your work. In actuality you are always being employed to express all the best qualities you are capable of, such as intelligence, wisdom, beauty, balance, grace, sensitivity, awareness, love..If you are miserable, it's your own fault. Make excellence, beauty, and truth your goals, and you will rise to that level." 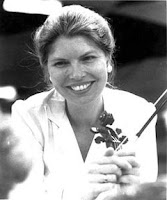 These words, of course, have touched me. In my joyful job of teaching I can put Marylou's ideals into action, with the goal of positively influencing young people. The students I mentor are receptive to lessons, not just related to the beauty of music and art, but in the cultivation of life sustaining values. Regrettably, as I look back on my own years of orchestra playing and the politics involved, I have to admit that all it takes is one rotten egg to turn upside down the workplace, creating a hostile environment. Reading events such as this and this reminds me that orchestras can be breeding grounds for toxicity. I urge young musicians to educate themselves of the realities of a profession perceived by the public as loftier than most.

Almost three decades ago, I went on tour with the Los Angeles Philharmonic to Europe. I was twenty-one years old at the time. It was sobering to witness the players in the orchestra turn into mealy-mouthed monsters. If you wish to watch a bunch of kindergartners hurl mud in the sandbox, accompany a group of orchestra musicians backstage during the breaks, or to committee gatherings where mob mentality prevails, or on tours. It is in these instances especially, that players are reputed for launching vitriolic attacks against their colleagues. At the time of the LA Phil tour in 1981, principal violist Heiichiro Ohyama fell victim to such abuse. His colleagues instigated a revolt to have him ousted from the principal post, although Mr. Ohyama had been offered his position by none other than Music Director Carlo Maria Giulini. By renouncing the principal violist, weren't the players contesting their music director's judgment? What made them feel emboldened to do so?

You will find that guiding lights, such as violinist Marylou Speaker Churchill, are a rarity in orchestras. I'm certain that she will be missed by colleagues in Boston, and throughout the world. Hopefully, in years to come (that is if orchestras even survive) there will be more musicians like Marylou.

Posted by kransberg-talvi at 12:42 PM No comments: 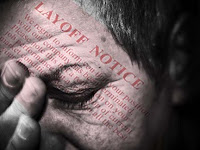 In the past several days, a few of our acquaintances outside the field of music have been victims of recessionary lay-offs. With every fresh casualty, a wound reopens in my heart. I'm reminded of our own personal struggles not too long ago. I detect the strain on peoples' faces who have been cut off from their livelihood, the quickly wiped-away tears, and the look of helpless panic in their eyes. Of course, when one is a public figure, such as a concertmaster, the media swoops in to help stir the pot. A person who sits in a cubicle all day, or sells behind a shoe counter, does not have to face public scrutiny the same way as an artist on stage. Perhaps one can sell shoes elsewhere, or work for another tech firm, but to start life anew as a concert artist is pretty tough, especially in the over fifty age group. I seem to recall the labor lawyers during a mediation session innocently asking my husband, "What about other orchestras in the area? Can't you just make a switch?"

At that time, I served as concertmaster for the Northwest Chamber Orchestra, but with only thirty to forty services per year, that could hardly have been considered full-time employment. Besides, NWCO folded a few months later. And yet, during my twenty something years with the group, although the chamber orchestra offered a generous health insurance package and other benefits, my coworkers would routinely opt out of rehearsals and performances whenever more lucrative engagements came their way, costing the organization additional expenses in the hiring of extras. Loyalty didn't exist. When the subject of a tour to Finland was put on the negotiating table, these same individuals, perhaps expecting a Daddy Warbucks to step in and offer unlimited sponsorship, made unreasonable demands for per diem rates, and derailed the entire tour. With the unnecessary loss of the tour, there went the entire organization.

There is a heartbreaking video of Honolulu Symphony musicians in their continued struggle for survival. The players are owed months of back pay, and face the potential of bankruptcy filing this week. Whenever I hear about fellow musicians being forced to eat through their savings, it acts as a trigger, like post-traumatic stress. Honolulu Symphony experienced a turnover of more than a quarter of its musicians as a result of the back pay issue, according to Local 677 of the American Federation of Musicians. I ask you, dear readers, what will this country do with all its unemployed and under-employed artists?
Posted by kransberg-talvi at 1:24 PM No comments: