As demand for live, classical music performances ebb with the economy, the arts world teeters with an over supply of conservatory-trained professionals unable to find steady employment. I applaud the foresight and wisdom of journalist/oboist Blair Tindall, author of Mozart in the Jungle—Sex, Drugs and Classical Music. This book, particularly the final chapter, should be required reading for eager, young conservatory-bound musicians. Tindall writes: Outdated rhetoric charging that the arts are a "necessity" sounds hollow at a time when so many Americans are hungry, homeless, unemployed, and without decent health care. Ironically, some of them are performers and artists. Culture can improve the spirit in so many ways, but only for those who can afford the time and money to attend performances or become involved in making art themselves. How can families justify spending money on performance subscriptions during times of intense, economic hardship?

Like Tindall, I believe audiences need to ask their local symphony, opera and ballet companies during the next "emergency" fund drive, how much executives, conductors and soloists are earning. While administrators of shows and ballets scramble to cut costs, I admit the option of replacing live orchestra with recorded music, as Oregon Ballet is doing for a portion of this year's Nutcracker, is a practical step.

After serving for over twenty years as concertmaster for Pacific Northwest Ballet, I know how tempo-sensitive dancers and choreographers tend to be. And who can blame them? Taped or "canned" music makes sense for long-term sustainability and artistic dependability. I'm reminded of the New York performance PNB gave of Balanchine's Divertimento No. 15 at City Center in 1996. I remember the incident well, as I was brought along to tour with the company as concertmaster (back in those days, my services were highly valued). The hurried tempos of conductor Stewart Kershaw caused Co-Artistic Director Kent Stowell to bolt from his chair, run down the aisle in distress, and yell "It's too fast, Stewart." I don't think Stowell deserved blame for his outburst. Too fast or too slow tempos have the potential to derail a ballet performance. As far as I'm concerned, Stowell's actions might have been deemed pre-emptive, a way of sparing his dancers from impending disaster in the high profile scene of Manhattan.

With today's increasingly superb technology, live orchestras and undependable conductors are dispensable. If we think back to the onset of the Great Depression, "talkies" meant devastation to many musicians; playing for silent movies was a respectable livelihood. And many shows today have replaced orchestra musicians entirely with the synthesizer, a far more cost-effective and reliable option.

This Thanksgiving, I offer my gratitude for being blessed with a loving, supportive and intelligent family, and for being liberated from you-know-what. I look forward to creating new goals and fresh traditions. The Talvi ladies shown in this photo are not push-overs, that's for sure. Though often in the minority, we stand by our values.
from left: Anna, Sarah, Marjorie & Silja Talvi
Posted by kransberg-talvi at 11:40 PM No comments:

While reading this story from St. Louis Post, adding to the long-list of arts groups facing tough economy and potential extinction, a name sounded familiar: Kranzberg. My paternal family, the Kranzbergs, originated from the Volhyn region of Ukraine, where a village by the same name exists to this day. As was the custom for most 19th century Russian Jews, my ancestors adopted the name Kranzberg from the shtetl they inhabited. No matter the various spellings: Kransberg or Kranzberg, or for that matter, Kronsberg and Kronzberg; we're all blood relatives. 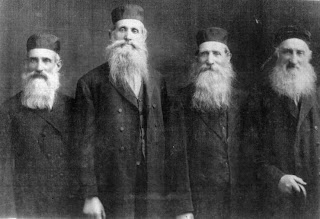 Legend has it, that two first cousin Kranzbergs settled in America during the initial wave of immigration from Russia in the late 19th century. One Kranzberg chose to drop anchor in St. Louis, as it was one of the most impressive cities of that time, and the other cousin settled in Boston. From those Kranzbergs of humble origins, butchers and grocers—from the world of Sholem Aleichem's Tevye the Milkman— sprouted an entire clan of prominent rabbis, scholars, professors, artists and businessmen. After closer inspection, I believe the St. Louis Kranzberg family possesses the higher collective I.Q. In 1996, eager to learn of my heritage, I accepted an invitation, along with my sister Susan, to Maurice Kranzberg's 85th birthday celebration in St. Louis. It was then I met the whole mishpokhe, and found myself enchanted by the other Kranzberg's hospitality, intellect, and devotion to the Jewish tradition of Tzedakah. In that city today, Kenneth and Nancy Kranzberg are benefactors of the Kranzberg Arts Center, Kranzberg Exhibition Series at Laumeier Sculpture Park and the Kenneth and Nancy Kranzberg Art & Architecture Library at Washington University.

Benefactors come in all varieties: the good, the bad, and the ugly. In my former role, as concertmaster, I met a cast of characters, enough to fill an entire novel. There was the appalling woman with an agenda of disposing of the Northwest Chamber Orchestra's principal conductor. Another NWCO benefactor requested a song in 4/4 (oh, but that's harmless) for a donor dinner, and then asked, "What does 4/4 mean, anyway?" But the benefactor who stole the show as far as reprehensible behavior was Mr. X, a local patron for the arts. After a fund-raising event where I performed on a tired-sounding, astronomically over-priced Stradivarius, this Mr. X. raised himself from his chair—breath stinking of liquor—and thrust his hoary hand down the front of my low-cut, black dress to deposit $200 into my bra. Cash.

No, dear readers, I didn't keep the money. I hadn't been sent by an escort service, although Mr. X, in his drunken stupor might have mistaken me for another violinist.
Mordecai Kranzberg (right) with three of his many sons, 1900
Posted by kransberg-talvi at 7:33 AM No comments:

After reading the news of Oregon Ballet cutting live music at Nutcracker, I'm grateful to not depend on any of the local arts organizations for income. In a strange twist of Fate, Ilkka and I reinvented our careers with Talvi Studio, after having suffered our own personal economic crisis. It's fascinating to observe colleagues cope with financial panic. As my Yiddish teacher, Ruth Peizer whispered before the election: It wouldn't hurt to have a little prosperity return to the economy.

What I didn't have the heart to tell my beloved teacher, is that when you're a blacklisted artist, prosperity makes negligable impact. What difference should it make to my family if local arts organizations, out of desperation, freeze hiring, lower wages, or reduce employment altogether? Ilkka and I were hit years ago by our sub-prime conductor crisis; we reorganized our priorities, and emerged stronger in the end, all without government aid.

Musicians scare easily. Make them grovel for employment, and they will. Case in point is the local recording scene in Seattle, where musicians waive royalties, over-scale, over-time, annual increases, and other objectives that were hard-won by unions and the American Federation of Musicians. Players might seem tough in collective bargaining gatherings, but when push comes to shove, they're a bunch of sheep.

In the restaurant business, waiters are guaranteed a low minimum salary plus small, basic benefits. The bulk of their income depends on gratuities. Allow me to play Devil's advocate for a magic moment: How about paying musicians and dancers a low, guaranteed salary, let's say $15K, and leave the rest to depend on the amount of actual work performed? In an orchestra, a string player's income would be the highest, with those instrumentalists only showing up for a couple of compositions, the lowest. Doesn't the New York Philharmonic already count minutes worked and offer relief to otherwise over-worked string musicians? Might it be more fair to pay according to the number of notes played, as was demanded in Germany not long ago?

Musicians closely involved with the Bellevue Psychiatric Orchestra maintain that their management assures their board that other orchestras, namely the Los Angeles Philharmonic, reaudition their players each year. Nonsense. However, this has me thinking. It might indeed be wise to annually reaudition all the players of all the orchestras, and especially their music directors. The executive directors and personnel managers should be assessed by means of psychological exams and please, don't forget to have them undergo lie detector tests at regular intervals.
Posted by kransberg-talvi at 9:22 AM No comments: 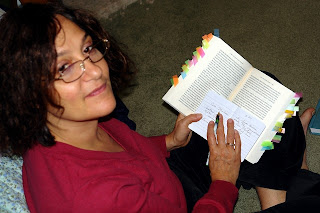 I'm reviewing All The King's Men by Robert Penn Warren for a book club meeting in a few days. As you can see, I'm doing my homework and taking notes. I need to crack down and really study, so I won't be posting until next week. Ilkka just took this photograph of me. He thinks I keep the post-it supply stores in business. But things fall out of my head, unlike his head, which is a magnet that attracts and retains a staggering amount of information.

Trust me, I need all the help I can get.
Posted by kransberg-talvi at 8:17 PM No comments: