In the Name of Progress 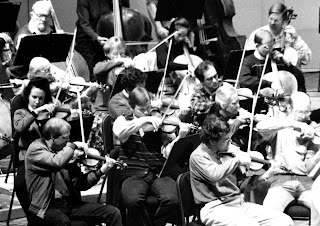 I was rummaging through my hat box the other day and found this photo. I'm at the age (midlife) of trying to connect dots; dots that will remain forever a mystery. I wondered, as I gazed at old photographs and other bits and pieces of memorabilia in my closet, how many changes are made in the name of progress, when really, the outcome might give one pause.

Taking a quick glance at arts organizations throughout the nation, how many behemoth venues have been erected in the name of progress? How many of these can be filled on a regular basis by hard-working, middle class folks, like me? Overly long subscription seasons; is that progress? For whom?

In the case of symphony orchestras, how many executive directors does it take to satisfy one boss? Who is the boss, anyway? How many motivated board members might be required? How many concertmasters? A few, like in European orchestras? How many auditions for that post? Twenty or more?

How many threats does it take before a first chair player might quit on his/her own—in the name of progress? Pink slips? Retaliations? How many services need to be cut, as in rehearsals, to make up for budgetary deficits? Collective bargaining meetings? Doctor's notices for missed rehearsals; how many? Litigation? How much documented evidence? What about my favorite: meetings with Human Resource personnel as the person-behind-the-desk stares blankly and says in a flat voice: You seem emotional.

How many blandishments from the press to recruit deep-pocketed donors? Complimentary tickets to paper the house? Premieres? Performances featuring obscure American compositions? How many school concerts to seemingly increase audience numbers? Programming changes to reduce extra player costs? Personnel managers? Lies as to when you're officially hired, and when you're (oops) not? How much over-time when the program sounds scrappy and ill-rehearsed? How many visits to Prague in order to feel the spirit of Dvořák? How many principal cellists? How many complimentary glasses of wine to lure an audience to a gala opener? How much cleavage? Hair? Am I forgetting anything?

Today I have only questions, no answers. Pop quiz: How many players are using vibrato in this photo?
Posted by kransberg-talvi at 3:51 PM No comments:

The financial outlook is grim across the nation for arts organizations. One glimpse at recent headlines for Washington Ballet and Detroit Symphony will serve as a sobering reminder. Citing financial constraints, the Washington Ballet will substitute the canned music for live orchestra, at least for the duration of the 2010/11 season, beginning with the opening production of "Romeo and Juliet" at Kennedy Center Theater, and later, to include "The Nutcracker".

The Detroit Symphony is on Day One of a strike, and as I see it, plunging headlong to its own demise. Detroit, a financially beleaguered city with a population of 800,000 can no longer sustain a "top-tier symphony" (translation: overpaid) with a 52 week season. And the players, refusing to accept a broader job description which would include outreach performances and teaching opportunities in schools without extra pay, demand to be "compensated what they're worth" regardless of Detroit's bleak, economic outlook. What they're worth has been a base salary of $104, 650 with most musicians earning around $120,000, and what they've been offered by management is a pay cut of 30%. As I've stated in a previous post, and without meaning to beat a dead horse over the head, the time is now for classical musicians to recalibrate their methods of survival.

Rules need to change. Examine, for example, the New Jersey Symphony Orchestra's new strategy. The NJSO has reconfigured themselves as a state-wide group that gives concerts in seven different cities. I'm reminded of the years spent as first violinist for the Los Angeles Chamber Orchestra, an ensemble that continues to thrive under the leadership of its Music Director, Jeffery Kahane. Back in my days, the orchestra performed in multiple venues in Southern California. (An aside: In the mid-1980's LACO's board realized that the budget was over-strained by the programming of large-scale works, and the hiring of  very expensive soloists. The ensemble struggled to stay afloat, but was fortunate to have succeeded in negotiating a contract with L.A.Opera, thus offering its players steady work).

Might the formula of regional concerts by a smaller "classical" orchestra, augmented by extra players when needed, make sense here as well, in the entire Puget Sound area? From this perspective, why not create an ensemble in the style of New Jersey Symphony Orchestra that regularly performs in multiple venues around the region, not just an occasional run-out? After a near-death experience, NJSO has been able to accumulate nearly 80% of the $32 million in capital that is its fund-raising goal. Wouldn't it be more cost effective for, let's say, the communities of Bellevue (with its proposed 2,000 seat concert hall), Everett, Bellingham, Olympia and Tacoma to serve their music hungry public with a top-tier, touring ensemble as well, enabling every city to share ownership?
Posted by kransberg-talvi at 12:38 PM No comments: