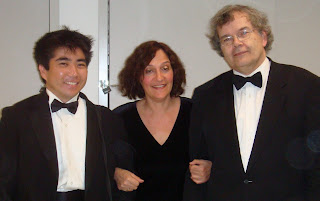 My late mother, Frances Kransberg, would have turned 87 today. I'll be visiting her grave later this afternoon. Rather than a bouquet of flowers, I'll bring Mom a note, crumple it up, and place it underneath a stone, as is Jewish custom. I can hardly wait to tell her about my year, and especially this past weekend.

For those of you that never met her, my mother was an amateur violinist; she loved music more than anything in the world. As a child, the violin held her fascination. Although she begged and begged her parents for lessons, my grandparents didn't have money for such frivolities. In the fourth grade, at Saltonstall Elementary in Salem, Massachusetts, ten-year-old Frannie picked up an old, broken down violin from the unwanted instrument heap, wiped off the caked rosin, and planted herself in the first violin section of the school orchestra. No lessons; my mom taught herself to read music. Her violin was put on hold after elementary school, but her love for music grew.

Sometime in her mid thirties, my mother struck up the courage to take private violin lessons. An attractive woman with dark hair, olive skin, and a petite figure, she had no trouble snagging the most accomplished teachers—all men from Boston Symphony, even though she was at beginner level. By the time she was pregnant with her fourth and last child (me), my mother played under Harry Ellis Dickson in Brookline Civic Symphony, and had become a respectable musician. She practiced seven hours daily and took three lessons per week. Brookline Civic ignited her spirit, lifting my mom from an existence of mundane domesticity, to a supernal world of magnificent sound. But her teachers admonished her for having begun lessons too late in life for a professional career. Frances Kransberg was the talent that could have been.

So, I was gifted with a quarter size violin on my fourth birthday, and I let you, patient reader, imagine the rest. My mom would say: Either you'll love me for this or hate me one day.
And there have been times, at least recently, that I've considered the classical music business a nasty, insular bubble. To be a professional artist, one has to be acutely sensitive, yet Teflon-coated, just to survive the cut-throat competition. These days, it's not enough to offer stellar performances; audiences demand eye candy as part of the package. Erica Morini had been my mother's role model, not some sex kitten.

Meanwhile, I have a tendency to walk into a room, and absorb the atmospheric vibes. If there's friction, or negative energy, I'm out. During this recalibrating period of the arts scene, some workplaces are growing ever more hostile, while others are undergoing a resurgence of recognition. At the Bellevue Philharmonic Orchestra concert yesterday, the First Presbyterian Church was packed to capacity with well-wishers, fans and supporters of the organization. It was heartening to see and hear the dedication of those eager to help usher in a new era for the BPO, as the group has been fraught with daunting challenges. In his gracious, farewell speech to the audience, Maestro Fusao Kajima reminded everyone not to remain passive, especially when faced with the task of rebuilding an institution. The orchestra is the Eastside's cultural jewel.
As my mother used to say: When you have a diamond, just take care and polish it.

One of the highlights of my year so far, were the performances of Mahler's "Resurrection" Symphony with Rainier Symphony and Maestro David Waltman. Not only did I have my favorite concertmaster at the helm and Anna in the audience, but I had the honor of Andrew Sumitani, my accomplished student, sitting by my side and playing like an angel.
Somehow, I couldn't feel luckier, and yes, healed.
left to right: Andrew Sumitani, me, Ilkka
Posted by kransberg-talvi at 10:13 AM