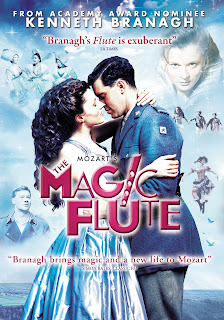 Sir Kenneth Branagh's retelling of Mozart's "The Magic Flute" with English libretto by Stephen Fry has finally been released and distributed to 150 Emerging Pictures network theaters across the United States and is available as a DVD. The film was first presented in 2006 as part of The Toronto International Film Festival, Venice Film Festival, and has played in many European countries. It is the first motion picture version specifically intended for movie theaters. Opera purists might get prickly at the idea of Mozart's well-known fairy-tale piece or Masonic opera (depending on which point of view) as a cinematic adaptation transplanted to the eve of the First World War. Branagh's "Magic Flute" retains Mozart's score in its entirety, with the soundtrack provided by the sensitive artistry of conductor James Conlon and the Chamber Orchestra of Europe, and features first rate, mostly young singers. The original libretto by Mozart's Masonic Lodge brother, Emanuel Schikaneder, remains for most an enigma. Goethe said of the drama, "More knowledge is required to understand the value of the libretto than to mock it."

Mozart most likely could taste death during the creation of "Die Zauberflöte". The singspiel was premiered in 1791 by Schikaneder's local theater troupe just a few months prior to the composer's death. Mozart, as most of us know (at least from the Peter Schaffer's popular movie "Amadeus") was convinced that he had been poisoned. During that fateful year, an unknown messenger brought a letter without a signature inquiring whether Mozart would undertake to write a Requiem Mass. Mozart had a presentiment of his impending death; the Mass, he assumed, was for himself. Mozart was unafraid of death. In April 1787 he wrote to his father: "As death, when we come to consider it closely, is the true goal of our existence, I have formed during the last few years such close relations with this best and truest friend of mankind, that his image is not only no longer terrifying to me, but is indeed very soothing and consoling! And I thank my God for graciously granting me the opportunity of learning that death is the key which unlocks the door to our true happiness."

Branagh's "Flute" catapults the viewer right into combat and death's grip but manages to artfully intersperse magic moments of comic relief, just as singspiel or light opera is meant to do, most notably in the character of Papageno (Benjamin Jay Davis). The overture begins with a dance of war and brutality. Rhythmic outbursts are precisely timed with rapid machine gunfire and explosions. Tamino (Joseph Kaiser) is being pursued by poison gas in the form of a serpent. He cries: "Angel of death has been sent here to kill me, can nobody hear me? I feel it's hot breath. The sharp stink of death." Tamino falls unconscious: "Am I still alive or did a higher power save me?"

Near death experience? Shock? Hallucination? Twilight sleep? Instead of three veiled women coming to the aid of Tamino, as the original libretto calls for, we find three buxom nurses. Masonic references are all but stripped from Branagh's adaptation. Instead we are taken on a harrowing journey through the flames of wartime death and destruction. Along the fantastical trip (could this be Tamino's neurons firing wishful dreams and a jumble of repressed memories of distant love?) we come face to face with the evil Queen of the Night (Russian soprano Lyubov Petrova) singing her famous aria on top of a tank. What unfolds is a gripping battle between the forces of the irrational evil queen and the enlightened values of Sarastro (German bass Rene Papé) as he calls upon Tamino and the object of Tamino's heart, Princess Pamina (Amy Carson) to undergo a set of trials, each one paving the way for the next, which, through their undying love and courage, will bring the war to its end and usher in peace. The flute meanwhile, with its magic properties, protects the couple through each of their ordeals.

In "Die Zauberflöte" Sarastro's character is based on Zoroaster, the king who was said to have invented magic. The eighteenth century went so far as to identify Sarastro with the prophet Ezekiel, others with Nimrod, Moses, and Ham, son of Noah. By contrast, Branagh's Sarastro is down to earth; he dwells in a field hospital rather than a temple, while caring for mutilated bodies and souls of  soldiers; ultimately, he prevails as a conjurer of a better world and proves to be a prophet of peace. As Kenneth Branagh makes clear, the universal message and music of "The Magic Flute" need not be for Illuminati only, nor opera elitists, nor a classical music know-it-all, but for every person.

Mozart equated music with magic, for as a child, to play a concerto and work a miracle was one and the same for him. Franz Schubert found in Mozart "comforting perceptions of a brighter and better life." Is it any wonder then that "The Magic Flute" is as vibrant and relevant while being transplanted to the Great War on screen, as it certainly was while set in an eighteenth century European theater?

Posted by kransberg-talvi at 8:30 PM