Reading this article about Carrie Dennis, principal violist of the Los Angeles Philharmonic, offers more evidence that today's audiences mostly listen with their eyes. Although I admit that we are a visually preoccupied society, what with internet and videos, I remain old school when it comes to mentoring my students, for I believe a compelling artist allows the music to flow naturally, with ease, and speak for itself. Histrionics, in my opinion, distract from interpretive style, nobility, and technique. The playing of a thrasher becomes unreliant; precision of intonation and focused sound is ultimately lost; the direction of a flailing instrument can be likened to a moving target. Inflections and nuances which need to be subtly rendered become heavy-handed and overly accented. Thank you, but I do not wish to be hit over the head with an interpretive idea or a beat pattern.

It is sobering to realize that for today's concert-goers and ticket buyers, musicians are expected to satisfy the viewing more than the listening. In the case of Ms. Dennis, who is undeniably a capable player (I listened to her here and here), I can't imagine that her colleagues in the Los Angeles Philharmonic are equally pleased by her gyrations; do they coincide with the conductor's gestures or do they confuse? Are these excessive pop-star like moves simply a release of nervous, pent-up energy? Does it really serve the music to telegraph every delicate phrase with motions which might create whiplash, nausea, or at the very least, cause potential injuries to others? Even Ms. Dennis admits that her thrashings have caused a few collisions.

"Sometimes I get Dale Silverman's scroll (the top of her neighbor's viola) at my head. At Curtis my stand partner whipped her bow across my forehead and it drew blood."

Ilkka and I had, years ago, the strange experience of hosting a violinist with, what I believe to have had a split personality. One day she was Esther, and another day she was a whole new entity. No matter, although we were never quite certain which of those entities we had in front of us; we taught her and accommodated her needs, gratis. In any case, this young lady was a highly gifted player, with good chops, as they say in this business, meaning solid technique. She had been primarily trained in the Netherlands, where her main teacher had coached her to perform a succession of choreographic moves meant to bedazzle audiences. To a point, I suppose it worked. The audience gasped as our guest held up her finger after a prolonged pizzicato passage in Ravel's "Tzigane,"as if the poor finger had been torn to shreds. But the show turned over-the-top when spoiled intonation and marred rhythms were disguised with foot stomps and head bobs, as if to somehow compensate for defects.

There are a few of us left with respect for artists, such as Hilary Hahn and Yury Bashmet, that are able to turn the attention to the music itself and convey originality rather than display their tics. I hope this current trend of self-absorbed mediocrity and fakery will fade out. Introducing Anna Karkowska!

Posted by kransberg-talvi at 9:53 AM No comments: 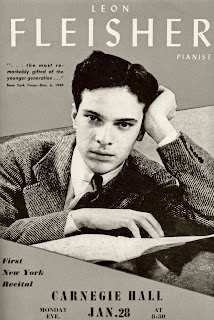 I have a poignant memory of pianist Leon Fleisher playing and conducting the now defunct Northwest Chamber Orchestra here in Seattle during the 2004/05 season; that was to be our last series. "Higher powers" in the local music scene had ordered its destruction. The demise of the ensemble meant that many of us would need to reinvent our selves.

Yuriy in the second violins raised his hand during a pause in the rehearsal with Fleisher. We were to perform, among other works, "Sheep May Safely Graze" (transcribed for piano by Egon Petri). "I have kvestion," Yury said in his thick, Ukrainian accent, a gold tooth gleaming.  Fleisher closed his eyes. "Keep talking. You sound just like my father who came straight off the boat from Odessa." I thought Leon Fleisher was about to cry as he remembered his parents and their humble origins. Fleisher's appearance with NWCO took place about a year after his triumphant return to Carnegie Hall playing a two-handed recital after over three decades.

The orchestra drank up the brief opportunity to work with this legendary artist. Fleisher shared with us the trauma of nearly losing everything on account of his debilitating illness. "If you're experiencing pain while playing," he said. "Speak up. You're not alone. I found this out too late. The most crucial thing is to take precautionary care. Don't try to be stoic like I was." We listened with rapt attention, as Leon Fleisher enlightened us about his focal dystonia, a neurological condition which causes muscular contraction and the curling and twisting of fingers. In Fleisher's case, at the age of thirty-six, just when his career had sky-rocketed, he lost the use of two fingers in his right hand.

Leon Fleisher's memoir, "My Nine Lives: A Memoir of Many Careers in Music" written with the help of co-author, the celebrated music critic for the Washington Post, Anne Midgette, is a beautifully told story which conveys messages of personal transformation through adversity. It is a distillation of wisdom.

Fleisher cannot remember a time without playing the piano. His memoir begins as a child prodigy growing up in San Francisco, the youngest of two boys. Fleisher's mother, a quintessentially doting Jewish mother, wanted her son to become either the first Jewish president of the United States or a great concert pianist. She at least lived to see the latter realized, though while on her deathbed, Fleisher remained in Amsterdam to perform as soloist with the Concertgebouw, a choice he eventually came to regret. "My mother was in many ways not an easy woman. Her vision for me was often constricting. And she certainly had trouble letting go. Even after I moved to Europe, she treated me as her little boy every time I came home."

Every one of his nine lives was preceded by a death which is shared in this memoir with tenderness, candor, and often a light stroke of wit. There was the expulsion from Artur Schnabel's class for laziness after ten years spent with the master; but afterward young Fleisher was jolted into becoming his own teacher. In 1949, after an unsuccessful second concert at Carnegie Hall, Fleisher had been deemed a "has-been" by impresario Arthur Judson. But then, there was the big win at the 1952 Queen Elizabeth Competition in Brussels. And just when his career reached dizzying heights, he lost sensation in two of his right hand fingers. "I was living in a nightmare. I would wake up happy and then remember: You can't play--Ever since I can remember, the most important thing in my life has been playing the piano." A tragic death was yet to occur with the loss of his partnership with George Szell, the music director with "laser beam ears" of Cleveland Orchestra. Over the years the two had become almost inseparable; they shared a certain unspoken bond. Szell was his musical father.

In 1965, Fleisher had been offered to play his beloved Mozart Concerto K. 503 with Cleveland Orchestra on a three month tour of the Soviet Union and Europe. But after a performance of the work at Severance Hall, Szell took him into his office and spoke the dreaded words,"You cannot play." That year was to have been one of the greatest years of his life, the culmination of a career. Fleisher was obsessed by the thought: "What good was it to have reached this point, to have worked so hard, to have so many insights, if there was no way to let anybody know about them?" And he descended into the valley of the shadow.

But many other lives were to begin for Leon Fleisher; that of pedagogue, conductor, arts administrator, and advocate for instrumentalists grappling with psychic and physical wounds. "My Nine Lives" is a book to cherish.
Posted by kransberg-talvi at 10:09 PM No comments: