No Longer Mine, Ayn

"I'm about to fling Ayn Rand from my bookshelves," I tell my daughter Anna.
"Why, Ma?" She asks, a mug of coffee in one hand, coconut macaroon in the other.
"She's contaminating my other books with her virtue of selfishness and mantras on individualism. Rand has shared the same shelf with humanists Elie Wiesel, Viktor Frankl and Karen Armstrong. I'm throwing her out."
"Ayn Rand's flying off store bookshelves these days, Ma. She's in demand. Let her stay, please. Besides, it's good to have dissenting views. Builds character. Let them all argue with one another."
"She's toxic," I maintain. "Look at what's become of this country. Capitalism. Greed. Each man for himself. What will happen to those in need? Social welfare? The arts? I'm scared to think—"

But I think back to the past, and what initially attracted me to her writing. Ayn Rand might be a useful companion for anyone undergoing the painful process of litigation or mediation, especially if you're a classical musician or artist like Howard Roark in Fountainhead, possibly facing the dismantling of your career. Rand's philosophy speaks:

A grueling day was spent in mediation. The mediator, a plucky middle-aged woman, relied on local newspaper clippings to support her arguments, supplied by the executioner. She held up a compilation of blog entries that was like Sunday School material, compared to what has circulated on the same subject since then, and unsuccessfully tried to scold the blogger. The media had been slanted in the direction of a local public figure, and the blogger stood up for himself. Little did the mediator know, a few years later, the dailies and "reporters" she relied upon would cease to exist. And the public figure, whose reputation was being fiercely protected, would wind up the subject of an exposé in the nation's leading paper.

I suppose I needed the staunch, individualism of Ayn Rand back then, at a time when I accepted selfishness as a virtue. But, no longer.
Ayn Rand - PBS
Posted by kransberg-talvi at 9:09 AM No comments:

A Mad Desire To Dance 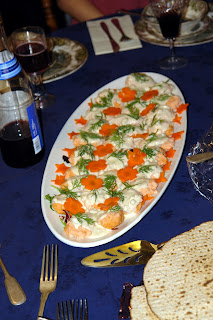 I've been busy observing Passover, the holiday which commemorates Israel's birth as a nation with an emphasis on reawakening or renewal, and catching up on my reading. Our holiday began with a wonderful Seder, in our home, among our dearest ones. There were many works of culinary art on our dining table, but the gefilte fish, made lovingly by David Waltman took center stage.

Passover induces us to ask questions, and obliges each and every parent to teach the story of the Jews' Exodus from Egypt to their children, the goal being that we feel as if we're reliving the event. Jews all over the world meditate on what it means to be freed, released from enslavement. And enslavement comes in so many varieties, one of the worst being my tormentor; self-doubt.

So for the past days, I've been reading Elie Wiesel's latest book: A Mad Desire To Dance translated from the French by Catherine Termerson. Wiesel has always preferred questions to answers; it is the quest which intrigues him; he has a soft spot for madmen and visionaries. Wiesel writes in his memoirs: Aren't we all a little mad, each of us in his own way? Mad to wish to live and to refuse to live, mad to believe in the future and also to negate it, mad to think we have eluded death and the dead?

A Mad Desire To Dance is a tough read. The primary character, Dorial Waldman, a 60ish-year-old man, displaced in New York City, turns to Dr. Therese Goldschmidt, a Jewish psychotherapist, for help through his dark journey. Slowly, in disparate sequences and painful silences, he reveals his burdens. Waldman is a tormented soul; as a child he survived the Holocaust hiding in a barn with his father in Poland. His mother, passing for a gentile, worked for the Jewish Resistance. He lost his siblings to the Nazis, and his parents perished in a car accident right after the war, on the way to Palestine. Except for his Jewish Orthodox aunt and uncle in Brooklyn, Waldman is accompanied day and night by ghosts and images from the past, unable to decipher the spectral encounters from reality. While immersing himself in Jewish religious studies and undergoing spiritual wanderings, Waldman becomes convinced that he's possessed by a dybbuk. The telling of Dorial Waldman's tale to Dr. Goldschmidt is convoluted, devoid of chronological order, and may result in dizziness for the reader.

There are nuggets of Jewish mysticism and folklore sprinkled throughout this novel, making it well worth the struggle to piece together a cohesive narrative. Waldman shares this insight with his analyst:

In my tradition man is supposed to believe that Satan chooses as his favorite prey the just man, not the sinner. Satan is brave. And ambitious. Cunning. He deals with minor everyday sinners out of habit, between two yawns, almost without giving it a thought. He prefers to go where he isn't expected. Where the challenge means a struggle. Where victory, always uncertain, will create a sensation even in the loftiest spheres. Parenthetically, Doctor, do you believe in this theory?

Elie Wiesel has helped to guide me towards my own spiritual quest; perfect nourishment for Passover.
Photo by Talvi: gefilte fish, this time salmon
Posted by kransberg-talvi at 9:46 AM No comments:

Last night I decided to head on down to Benaroya Hall to hear Greek violinist Leonidas Kavakos with Italian pianist Enrico Pace. This will conclude my eye-witness account of the local music scene facing economic survival for the time being. Passover begins next week, so I'll be pre-occupied with Chometz, the stuff that causes leavening in food and puffing up of the ego, as well as what it means to be liberated. I didn't want to miss Kavakos, especially after reading this quote: "Music is about devotion, and knowing when to be free."

I'm an admirer of this unique violinist, having enjoyed his recordings, especially the Ysaye Six Solo Sonatas, over the years. As a violinist myself, I'm grateful that Kavakos is not the cookie-cutter model, like most American players streaming out of Juilliard. To be sure, if Leonidas Kavakos were growing up in Seattle today, the local puffed up "pedagogues" might take him to task for displaying an unorthodox bow hold. They'd probably insist on sending him to "violinist rehab", a place to be molded like everyone else.

Kavakos and Pace presented a program that might have been considered too austere and esoteric for the Seattle crowd. They offered an entire menu of sonatas by Beethoven, Shostakovich, and Richard Strauss. The main floor appeared rather full, but like the last two events that I attended at Benaroya, the tiers were empty, even more so. I suspect the house was papered to a degree. A student I bumped into admitted he had been given a free ticket. Also, clapping occurred between movements, even during Beethoven's Third Sonata, suggesting the audience might have been unfamiliar with concert etiquette. Personally, I see no harm in bursting into applause at the conclusion of a movement—don't opera audiences cheer after a beautiful aria?—but Mr. Kavakos appeared perturbed by the disruptions in his performance. At one point, he wagged his bow like a finger, as if to indicate the audience had been naughty, and to serve as a warning. After the initial movement of the Strauss, he gestured with his hand to prevent applause.

I was surprised to not find more music students, particularly violinists, in the audience. True, Leonidas Kavakos is not a household name in Seattle. However, he conveys an originality of style and mercurial technique seldom heard these days. The collaboration of Kavakos and Pace in the Beethoven Sonata Op. 12 displayed elegance and integrity between both partners. The Shostakovich Sonata Op. 134, a work created for David Oistrakh, casts a gloomy, forboding mood which, to my mind, could serve as commentary for the decline of cultural standards and current affairs. During the second movement, the sinister sounding Allegretto, Kavakos and Pace played as if they were demonically possessed. Theirs was an electrifying performance, which caused this listener to bellow "Bravo".

The program concluded with the Violin Sonata in E-flat Major of Richard Strauss. Although it was played beautifully by both artists, and Kavakos possesses a suave, sumptuous tone, I felt the piece fell short on the Viennese cafe style for which, especially the slow movement, it was conceived. It could have used just a tad more, let's see—how can I word this—schmaltz.

Clearly, if orchestra programs are a tough sell, recitals today are even less in vogue. Perhaps such programs might be better served in smaller venues, as they were originally intended; one misses a more intimate setting.
Photo by Yannis Bournias
Posted by kransberg-talvi at 9:37 AM No comments: