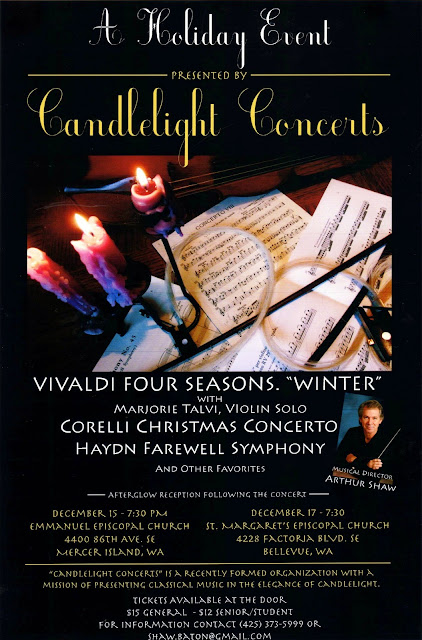 This holiday season, I recommend a perfect musical gift to share with loved ones of all ages. Maestro Arthur Shaw presents his beloved "Candlelight Concert" family tradition from Ashland, Oregon and the Midwest to Mercer Island and Bellevue. With a brilliant, new ensemble comprised of respected musical families, Maestro Shaw will present two concerts featuring such cherished favorites as Vivaldi's "Winter from 'The Four Seasons'", Corelli's "Christmas Concerto", and Haydn's "Farewell Symphony" in the elegance of candlelight.

"This is a way of stepping back in time", says Shaw, "and hearing music with just the right ambiance. We'll be recreating a listening experience much like that which would have prevailed in the days when the music was composed. I believe there's nothing that can beat live music in such a romantic setting."

Shaw brings together a roster of formidable players; Ilkka Talvi and Walter Schwede as veteran soloists in Corelli's "Christmas Concerto", and prize-winning young instrumentalists, including cellists Camden Shaw and Karissa Zadinsky, and bassist Derek Zadinsky. It is, in fact, difficult to keep track of these younger  players' accolades; they are too numerous. Upon graduation from the prestigious Curtis Institute, and while currently serving as cellist for The Old City String Quartet, Camden's group captured the Grand Prize of the 2010 Fischoff Award. His was chosen out of 48 competing ensembles from across the nation and around the world. Derek Zadinsky, also a recent Curtis graduate, returned in November from touring as a substitute bass player with Cleveland Orchestra. And Derek's younger sister, Karissa, was a winner of the Seattle Symphony Young Artist auditions.

The blend of exceptional youngsters and their established colleagues could be construed as a fusion of past and future; a hope for tomorrow's crop of burgeoning homegrown talent; and an incentive to the entire Eastside region for the support of live music. "Personally, I couldn't help but feel that the loss of Bellevue Philharmonic created a void here," says Shaw. "Bellevue is my community, my home. It is my hope to fill that void. By performing Candlelight Concerts, hopefully, we'll start a new tradition on the Eastside; one  that will create a smile in everyone's heart."