After sorting through much of the dirty laundry in the Brazilian Symphony Orchestra (Orquestra Sinfonica Brasiliera) on Norman Lebrecht's Slipped Disc, I've come to the conclusion that many orchestral musicians are afflicted with group think and a heightened sense of entitlement. In an effort to raise the collective artistic quality of the Brazilian Symphony Orchestra to an international standard of top rank, music director Roberto Minczuk (protégé of Kurt Masur and artistic director of Theatro Municipal do Rio de Janeiro) and the Board of OSB proposed an equitable re-evaluation procedure for the entire orchestra, an ensemble plagued by insufficient artistic level.

After the organization celebrated its seventieth anniversary, fiscal conditions changed for the better, due  to the sponsorship of private investors. These improvements now include a contract offering over 50 percent raise in salaries, a broader concert season, and an entire series devoted to chamber music, to be performed by all members of the orchestra.
Prior to 2006, auditions were held informally without adherence to industry standards, including the behind-the-screen aspect which is integral to impartial hiring. This lackadaisical and misguided approach resulted in the admittance of a number of substandard players. It might be noted that the privately funded Orquestra Sinfonica Brasiliera, in accordance with the Constitution, does not offer possibility of tenure. They are not breaking any laws here.


What I find admirable, is that rather than singling out individual players or turning colleagues into denouncers, or firing musicians for reasons that might be construed as personal biases, the Board of the Brazilian Symphony Orchestra Foundation has insisted on a formal screened evaluation process; one that, in my opinion, appears to be completely ethical; a five-strong panel comprised of impartial, leading musicians from the United States and Europe are to offer performance evaluations and constructive feedback for all musicians. Side note: the OSB members were given a month of paid vacation, in addition to the regular vacation of 41 days, to dedicate themselves fully to the audition. A letter to the orchestra members by  Minczuk stated that none of the re-evaluation participants would be dismissed; only those who refused to audition would be let go; and this, in fact, has happened. Those who refused to audition were promptly dismissed. In his letter to the orchestra, Minczuk also stated, "We are fully aware that musicians that have been playing in the group for more than twenty years might not be in the same shape as younger players." Age itself would not be a liability.
Why do I react strongly in favor of this particular re-evaluation method? I'll tell you. Although principal players might be exposed during performances, that is not the case with the protected class of section musicians. Obviously, instrumentalists that were below par at the onset cannot suddenly catapult to top notch level by magical thinking. This begs the question: Why is it that in most other institutions, corporations, and organizations one is expected to submit to routine evaluations, but your average orchestral musician deems such a process "unfair"? Could it be that the loudest opponents sense the unveiling of a new business model—one that offers competitive standards?
I wish Maestro Roberto Minczuk strength on the podium in the face of entitled, self-satisfied group thinkers.
Posted by kransberg-talvi at 5:04 PM No comments: 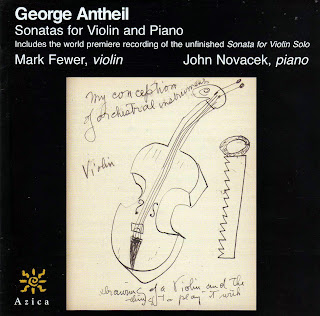 Perhaps you've heard the adage, "tell me who your friends are, and I'll tell you who you are".  George Antheil (1900 -1959) the self-proclaimed "bad boy of music" from Trenton, New Jersey kept close company with James Joyce, Pablo Picasso, Ezra Pound, Man Ray, Aaron Copland, George Balanchine, Jean Cocteau, and of course, his idol, Igor Stravinsky. After compositional studies with Ernest Bloch in New York City. Antheil spent most of his time in Europe from 1922 to 1933 before returning to Hollywood to work in the film industry. His well-known film scores include “Dementia”, “Once in a Blue Moon”, and “The Plainsman”. In his autobiography, “Bad Boy of Music”, Antheil describes that in art, there have been but two basic phenomena, an inhalation and an exhalation. The first produces one series of art movements—among which we can include the so-called “classic”. It inhales, pulls in, restricts. The second produces an equally different general kind of art—into which we may place “the romantics”—Art remains healthy and alive only so long as its normal in-and-out breathing is not too long restricted—Art cannot hold its breath too long without dying. In the Sonatas for Violin and Piano featured on this disc, including the world premiere recording of the unfinished Sonata for Violin Solo (1927), superbly rendered by violinist Mark Fewer, Antheil proves an innovative and imaginative forerunner of today’s eclectic modernist composers. It was in Paris that Antheil described his works in time-space terms; the new fourth dimension of composition; the machine music of the future. George Antheil infused his works with the wild rhythms and raw vitality of modern machinery and industry. In “Ballet Mécanique”, a composition which caused pandemonium in Paris, the piece was scored for ten pianos, one mechanical piano, six xylophones, two bass drums, a wind machine with a regulation airplane propeller and a siren.  His radical mixture of jazz, discords, and cacophony caused him notoriety. Antheil’s original title for the work might be revealing: Message to Mars. Antheil’s two first violin sonatas (1923) were commissioned by Ezra Pound for his mistress Olga Rudge, a fine concert violinist, originally from Boston, renown for her dark beauty and penetrating lower register on the violin. While concentrating on the First Violin Sonata,  Antheil faced a period of intense, compositional writer’s block. It was during that time he set out for the exotic land of Tunis, and consciously absorbed the local Arabian music handed down from the centuries. This adventure ultimately enabled him to add more timbrel effects to his writing and break away from Stravinsky’s grip. He returned to Paris revitalized, and completed both the First and Second Violin Sonata. Both works are filled with dissonant melodies, parodies of popular folk songs, and a sense of humor.   The performance on this CD by violinist Mark Fewer and pianist John Novacek is first rate. Both artists convey the versatility, intensity and dynamism inherent in Antheil’s eclectic style. Fewer and Novacek switch effortlessly from the primal pounding rhythms inspired by Stravinsky, which obviously require much stamina, to the pastiche of ragtime, vaudeville, tango, tin pan alley, fox trot and jazz. With incisive and well-muscled playing, they captivate the difficult effects required in Antheil’s compositions. The range of both instruments are pushed to the limit—hand clusters and glissandi on the piano, and unconventional sound effects, including arpeggiated chords played percussively behind the bridge and non-pitched scratches from the violin. For sheer virtuosity and panache, this recording is a towering achievement.
Posted by kransberg-talvi at 4:31 PM No comments: