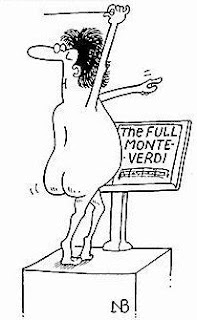 A couple of weeks ago, I was in my Eurovan crossing the Ballard Bridge and listening to "All Things Considered" when I heard these sharp words articulated in a fine, British accent: Is my boss sane? I practically careened off the bridge, as the question brought to mind a former workplace, where I was derided for ruining a production by the playing of an incorrect note. The thought-provoking question was offered by philosopher and author Alain de Botton during the promotion of his latest book: "The Pleasures and Sorrows of Work". Mr. de Botton states in his NPR Opinion piece: The probability that a boss is well-adjusted is not as high as we might like. Many bosses manifest "paranoid-insecure" patterns of behavior, which make for mood swings, excessive suspicion, anger, inability to focus, over-obsession with status, and a diminished capacity for empathy.

But Mr. de Botton, how did you know? Have you interviewed my former colleagues? He continues: Then there is paranoia. How much damage is caused in this world by fragile egos. Whatever the dangers of bumptious overconfidence, they are nothing next to ravages brought about by a fragile self-esteem. It is this that will cause explosions of rage, intemperate waspish e-mails, and snide remarks.
---To those cursed with one, the bad boss is an object of constant thought.

Recently, a former co-worker informed me that his boss, a baton wielder, had chided him for not "looking smart or sharpening up his image"and not being "trained to look like those around him". Told that he was "one of those kind of unsophisticated Americans that should be living in Tacoma" this musician, a young man of Native American descent, had an unfortunate Staph infection on his forehead at one time. The boss ridiculed that he was "beginning to look rather like a unicorn", then proceeded to blow cigarette smoke right into the musician's face.

Which brings me back to ruminations about Alain de Botton. His books "Status Anxiety" and "How Proust Can Change Your Life" accompany me on my twice weekly hikes to Discovery Park. "Status Anxiety" is particularly helpful if you're grappling with the issue of having gone from a perceived somebody, to a percieved nobody. I suppose anyone who has lost a job might benefit by this valuable insight. And I've kindled "The Pleasures and Sorrows of Work", a book I find immensely enjoyable as it enables me to peer into the hidden professional lives of others. We are reminded that most of us are still working at jobs chosen for us by our sixteen-year-old selves; what is the magic ingredient that makes our careers either fulfilling or soul destroying? What happens when we become so specialized in one area that we lose sense of the whole? As if my interest wasn't already ignited by de Botton's charming and enlightened essays, his internet outburst to New York Times reviewer Caleb Crain, after receiving an unflattering review: I will hate you until the day I die added a whole new dimension to my level of respect and admiration for the writer. I genuinely hope you'll find yourself on the receiving end of such a daft review some time very soon. He went on. You've now killed my work in the United States.

Not for this reader. Show them, de Botton!

Posted by kransberg-talvi at 1:41 PM No comments: