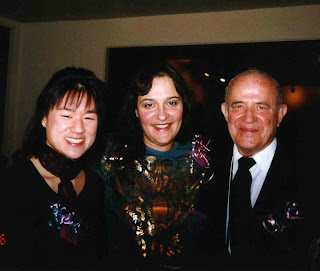 Today I received a phone call from a former student, Irene Cheng, now a member of the Pittsburgh Symphony. We had a lot of catching up to do. Irene was my first pupil, back in the days when Sidney Harth was Music Director of Northwest Chamber Orchestra, in the late 80's. I was pregnant with Anna then, trying to conceal my pregnancy by wearing lots of Laura Ashley jumpers. But one day, Irene's mom asked, "Are you pregnant?" And we all broke into laughter.

Irene and I took a trip down memory lane, just a few moments ago, by telephone. She reminded me how I took her to task for not practicing and paying enough attention to details when she was a teenager. Actually, Irene was light years ahead of many students these days, as she always came prepared for lessons, but as a 16 year old, just didn't understand the perfectionism required for great violin playing. It wasn't long before she grasped the rigor of the art form, and as a result, her progress went full speed. After a few years with me, Irene worked exclusively with Ilkka, and completed the undergraduate requirements at the UW. She, very wisely, picked up a degree in a field outside of music, to have as a fall back. Later, Irene Cheng was awarded full scholarship at Yale University, and completed her Masters in Music with Sidney Harth.

For a short time, Irene played in the Pacific Northwest Ballet orchestra, as a core second violinist. That was her first professional gig. But one day, she showed up in tears backstage. "This isn't the place for me" she said, recognizing that life in the pit leads to nowhere, and colleagues of lesser abilities were judging her, making her feel like an outsider. The stick man wasn't able to divine her musical ability by reading her face, as was his custom. "I want to better myself, not stand still," she confided.

And that is a vivid recollection I have of Irene, because her words came true. And, as we were harkening to the past, we returned to the present. The Music Director of Pittsburgh Symphony, Manfred Honeck, commended Irene for her individual European approach to violin playing, a style which reflects traditions from the past, and is rarely heard nowadays. Although Seattle doesn't seem to appreciate this originality, preferring the cookie cutter approach, it's all the better. Pittsburgh Symphony does, and they're not suffering from bad press or fiscal irresponsibility. So, one might say, Irene's in a better place. What more could a teacher ask for?

In the picture: Irene, me and violinist Irv Eisenberg (who just celebrated his 90th birthday), mid-1990s
Posted by kransberg-talvi at 3:46 PM No comments:

I have less than a week left before turning fifty, or forty-ten as my husband puts it. My daughter Anna keeps a stack of retirement home brochures in a special drawer, and assures me that she'll select the perfect home, when the time comes. Anna proposes a "nice Jewish environment" for me when I can no longer take care of myself; a residence where I can participate in hat-making contests, hamantaschen baking, Purim parties, sing-a-longs, and of course, my favorite (NOT)—flower arranging. She even insists that I'll be able to play a Fiddler on the Roof medley during visiting hours for family and friends.

But, for now, I'm still in relatively good condition, walking up and down hills in Queen Anne, browsing the library shelves and comparing grocery prices, like my own mother, Fran Kransberg, used to do. My youngest daughter, Sarah, assures me that I'm a youthful almost fifty, and Ilkka still makes me feel like a blushing bride.

The one thing I most look forward to in my old age is telling tales from my life. I'm not talking about pleasantries, which I find boring. No, what I want to share with my readers are some of the more bizarre happenings which I've experienced. At my age, am I not entitled? 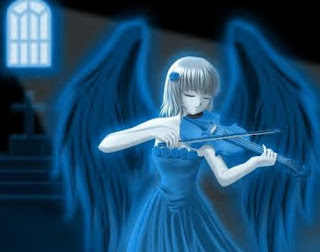 Back in 1999, a twenty-year-old girl swinging a violin case showed up at our front door and introduced herself as Esther. She wanted an assessment as to whether or not she was qualified to become a professional violinist. Expecting a student-like player, I escorted Esther downstairs and encouraged her to play a piece of her choosing. After making a set of excuses for herself in advance, I haven't practiced in months, she slowly unzipped her case, and propped the violin under her chin. A few uncomfortable giggles later, Esther rendered an incomparably beautiful performance of the Tchaikovsky Concerto.
"You'd give even Hilary Hahn competition," was my remark after she finished, although I secretly noted the unfortunate Nadja mannerisms.
"Really?" she quizzed. "You mean—I shouldn't—um, quit?"
"Why would you do a thing like that?"
"The church," she said, eyes downcast. "I'm to be wed, and a path has been chosen for me."
Oy, I thought to myself, such a waste of talent.

In the ensuing days and weeks, I tried to learn more about this mysterious Esther. How had she found my name and why did she come to me? She returned to play for Ilkka, and the two of us were dismayed. Esther, it turned out, was being dissuaded from pursuing a career in music by her Fundamentalist Christian host family. She had arrived in the United States from Europe in search of a cure from her past. One thing for certain, Esther had been privileged with a strong education. Like her violin playing, her spoken English was pitch perfect.

Ilkka and I offered to come to Esther's aid, as we felt she was in need of a stable environment. We provided free lessons, free meals, and free transportation, as she was almost totally without funds, and helped to support her goals of resuming a musical career. As Esther's host family increased their fundamentalist ultimatums, we took her in as a lodger, free of charge. It was then we stumbled upon one small detail: Esther's name was not Esther. A whole new identity had been created for her, or had she created it herself? Esther's narrative resembled a suspense thriller, and whenever we asked for details about her real family and personal history, our guest would pass out and collapse onto the floor. Medical personnel shook their heads and ruled out any physical abnormality as a cause.

Initially, before I had an inkling as to the psychodynamics at play, I had thought our guest might respond to the numerous lessons, food and lodging, in kind, by assisting with a few light chores or watching the children. But this mysterious stranger helped herself to whatever she needed from our home. She raised eyebrows at competitions. The woman was, after all, twenty years of age. One is still eligible to participate in solo contests until the early to mid twenties. She talked endlessly about her musical aspirations, weighing one scenario against the other, comparing one violin teacher to the next, and pointing out deficiencies of those around her. I should have taken it as an omen that our cat, Seymour, got hit by a car and lost his eye that year. And each time a possible confrontation arose, she'd land on the floor.

Almost six months passed before I felt emboldened to insist the guest leave. We needed our lives back; our children, the top priority, not to mention financial obligations. Our visitor furthered her education with artists of renown at reputable institutions, and went on to collect top prizes in international competitions. Her guest appearances also included many hospitals, as an inpatient. The medical bills and student loans in the United States went unpaid. Collection agencies tried to locate her. Wouldn't you know, she had given our address as her own? The phone calls and letters demanding repayment persist. These days, she's back in the country of her origin. With piles of unpaid bills, I doubt she can return to the States. I don't profess to know what path she chose for a religion, as it's irrelevant. However, it's been pointed out that she features an endorsement on her website by an Antichrist, as opposed to any of her esteemed mentors.

You think this story is bizarre? Just wait!
Posted by kransberg-talvi at 10:48 AM No comments: