The memoir 'Strings Attached: One Tough Teacher and the Gift of Great Expectations' by Joanne Lipman and Melanie Kupchynsky has been preoccupying my mind lately. The other night I dropped off to sleep after relishing the story to the final page, and conjured up Jerry Kupchynsky in a dream. For the last few days, Kupchynsky has become as present in my life as if he were a member of my own flesh and blood family. "Mr. K." as his students affectionately called him, might have been cut out of the same cloth as my late mother, Frances Kransberg, for his discipline and love for the violin are eerily similar. Perhaps I feel a kinship, too, because my paternal Kransberg roots are from the same neck of the woods as Kupchynsky's: Western Ukraine which borders along Poland. In that vicinity stands my ancestral village of Kranzberg, which after searching and searching, I find has been renamed, Mala Ozymyna. I have wanderlust; my own children know this. I want to return to my roots. But given the region's volatility, the closest my husband will allow me to travel to the Ukraine is via Google Earth. 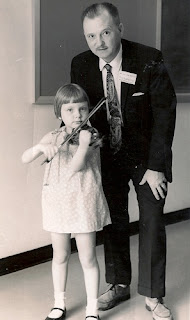 Jerry (Jarema) Kupchynsky was a survivor, and by dint of his teaching method, so were his students. Born in 1928, Kupchynsky grew up "right into the teeth of Ukraine's Holodomor, a great famine when millions of Ukrainians starved to death." 'Strings Attached' begins in a breezy fashion, alternating mostly humorous glimpses between Melanie Kupchynsky, Mr. K's daughter, now a violinist with Chicago Symphony, and former student, Joanna Lipman, a prominent journalist and founding Editor-in-Chief of Conde Nast.  They fill the pages with reminiscences about their childhood and adolescence in the midst of Kupchynsky's eccentricities. Mr. K's parenting tactics are all too familiar, including one of his favorite expressions: "When I say jump, on the way up ask how high!" But there are also dead give-a ways that he is haunted by a tormented past, a past which includes having been a forced laborer in World War II. One morning at breakfast, little Melanie reaches to her father's bowl of Life cereal, and he slaps her hand away. A mouse has gotten into their cupboard, left droppings in the cereal. Melanie's father won't allow perfectly good food to be wasted. "I'll eat around eet," he shrugs.

In his capacity as music teacher for East Brunswick school district during the late 60s and early 70s, Mr. K would yell at his orchestra, "Orchestra eez not democracy. Eez benign dictatorship." By today's classroom standards, one might be horrified by Mr. K's old school tirades, the singling out of students, the name-calling ("Who eez idiot who play wrong note?!). Lipman observes that middle schools everywhere tend to be the "killing field of musical ambition." She writes that there's even a technical term for it by researchers who have studied the phenomenon: the 'I want to quit' phase. Indeed, I've had several students abandon their music studies simply because they were dissuaded or ridiculed by their peers. But while many teachers would coddle their students, or try to ease up on their expectations, Mr. K. drove his kids harder. As one former student of his said: "Taking lessons with Mr. K. felt like playing for the Yankees. You put up with the shit because it got you to the championships." And indeed, not only did Mr. K's students fill the prominent ranks of national youth orchestras, but many went on to lead highly successful careers in each corner of the world, only to thank their tough-as-nails teacher later.

But the meat of the memoir is Jerry Kupchynsky's heart-rending personal plight. Not only had he survived the war and brutality from his homeland and Nazi Germany,  and served with American forces in the Korean War, but his wife was afflicted by multiple sclerosis. Finally, he was left with the most difficult task of all: to raise the youngest of his two violinist daughters, Stephanie, by himself. Stephanie Kupchynsky, a much sought after and admired violin educator in her own right, mysteriously vanished one day; her disappearance lasted as an unsolved crime for many years until her corpse was finally discovered.

'Strings Attached' offers ample opportunity for readers to search deep in their hearts, to recognize and feel a debt of gratitude towards all those special teachers and parents out there who believed in them,  who pushed them beyond limits. Mr. K boiled his philosophy down to self-discipline. Whether you agree with his approach or not, through sheer force of will, it was said that he made all of his students better than they had any right to be.
Posted by kransberg-talvi at 5:21 PM No comments:

If any parents out there are wondering what artist/teachers are looking and listening for in young students, there's an illuminating interview of Itzhak Perlman on Charlie Rose from a couple of years back. I've often boasted that I can spot musical talent within seconds. Age is irrelevant for me. Even with, say, a five-year-old barely able to squeak out a song, I can tell if there's a gift; that certain something; a spark, a passion, an ear, of course. Perlman claims in this interview that the spark resonates in the eyes; I wholeheartedly agree. How do you define talent? asks Rose. Perlman goes on to explain that one can not only hear how the notes are magically turned into vehicles to express, but see the 'look' in the performer's eyes; how the young player responds to harmony as an indicator.

I'm reminded of the time a youngster arrived here to play the first movement of a Vivaldi Concerto. The pulse was somewhat erratic, the bow hold somewhat clenched, the vibrato somewhat excessive, but the violin sang nevertheless. I heard a poet and I wasn't wrong. "You have to have something to say to make great music," says Perlman. "The truly gifted have an instinct—and an ear."

Refreshingly candid, if you ask me. Enjoy!

Posted by kransberg-talvi at 6:35 PM 2 comments: 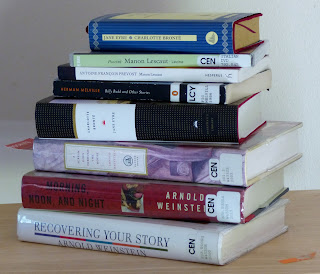 Truth be told, I had little idea what I was signing up for when I joined Arnold Weinstein's online "Fiction of Relationship" course through Brown University and Coursera. Matter of fact, it was my dear friend and fellow book lover, Olga, who tipped me off. I wasn't sure if I could keep pace with the requirements of the class, given my often chaotic and fragmented schedule of teaching violin and  film recording gigs, though I knew the price was right—(it's free). But when I heard the words from my husband, "You won't have time for that—" in defiance, I signed up. (Nothing beats reverse psychology in our house.) Within moments, I found myself taking a survey. Had I joined the class because I knew of the professor, in this case, Arnold Weinstein? My answer was, shamefully, no. I admit my ignorance in having not known beforehand of Professor Weinstein's fame as Brown University's Distinguished Professor of Comparative Literature and esteemed writer and critic of numerous books, including one I now hold dear, "A Scream Goes Through the House: What Literature Teaches Us About Life."

What I have discovered during this journey is a whole new way of attempting to uncover the layers of selves in oneself and others. It is almost as if, on a few occasions, I've felt myself stepping out of my body to witness my words and actions while at the same time wondering: what is it you think I'm thinking? Yes, the professor has really gotten to me, entered my pores and seemingly crawled inside my head. He has infected me with his ideas. At a time when the information age and technology might be blamed for producing a senseless, soulless society, Weinstein's "Fiction of Relationship" works as a humanizing and vivifying force; an antidote to bland, boring, narcissistic, paper-pushing, solipsistic manners of existence. And lucky for us, we can attend his lectures and peer right into his classroom at Brown University with the click of a key.

Weinstein has a way of penetrating, of inoculating, as do the literary masterpieces of Brontë, Prévost, Kafka, Woolf, Faulkner, Morrison, Coetzee, Melville that are on our reading list. The dead and forgotten are no longer dead and forgotten. They can, and shall be, resurrected. Weinstein, quite rightly, likens the absorption of literature and art to intercourse. The written word and creative act, when potent, has the capacity to enter our bloodstream and become part of who we are. In "Fiction of Relationship" as we "try on" the various literary characters we meet during our journey, Weinstein suggests that we imagine ourselves as psychotherapists being told these narratives from characters/patients lying on the couch. How to make sense of the character/patient? Oh, Professor Weinstein, if only you knew how much I love to diagnose! Just ask my daughters and violin students!

I recommend Arnold Weinstein's "Fiction of Relationship"  to every person in the world.

Posted by kransberg-talvi at 5:37 PM