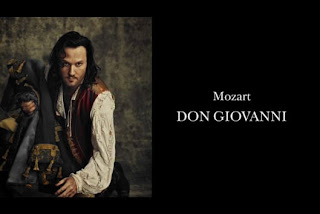 Thank goodness for caller ID. A few months ago, the marketing department of Seattle Opera called here repeatedly requesting to speak with my husband. Reason being, at one point in time we had donated thousands of dollars to Seattle Opera. But lo and behold, an unfortunate and untimely incident resulted in this family's disaffection (to put it mildly) with the local arts organization. The telemarketing calls were persistent nevertheless.
"Why do you need to speak with my husband?" I asked finally.
The calls had begun before 8 A.M.
"Well, Seattle Opera wants to help you purchase the best available seats for 2013 Ring Cycle!"
"Really? It's a year and a half away."
"True," said The Voice. "Tickets are going fast and, certainly, you don't want to be stuck waiting in a long line for only a few remaining seats."
You don't have to worry, I thought.
"We can help you—"
"Thank you very much," I said, and hung up the phone. Days later, Seattle Opera had succeeded in making it to our personal blocked numbers list.

Which might partially help to explain why the winning streak of Metropolitan Opera's General Manager, Peter Gelb, proves so irksome to many. While other opera organizations currently flail on life support, the Metropolitan Opera, according to the Met's 2010-11 tax returns, ended with a $41 million surplus in 2011. Online debates are rife with vicious comments directed at Gelb, with everything from his initial censoring of the spiteful, mealy-mouthed reviews from Opera News, his monopolizing of movie theaters, to his unflagging support of the ailing and absent Maestro James Levine. Meantime, Gelb snapped up Italian conductor, Fabio Luisi, from European engagements. Recently, Luisi was named the Met's Principal Conductor.

The problem with Gelb is not a question of whether or not he has succeeded in regaining momentum for an aging art form, and helped to turn around and revitalize the artistic purpose of the Metropolitan Opera. The prickly issue is, as I see it, that Peter Gelb, a self-proclaimed risk taker, out-performed the rest; other opera companies are left kicking themselves while, yes, Gelb discovered the gelt. The Met's live transmissions to everywhere in the world are his brain child. He got there first.

I find myself unable to leave my seat at the movie theater even during intermission, for I wouldn't want to miss a moment of back stage camera work and up close interviews with cast and crew. For those wagging their fingers and letting loose their tongues about the sad state of arts education,  Met Opera on the big screen provides one of the most enriching experiences to be had, yet inexpensively priced with the best seats in the house for everyone. At the recent Encore presentation of Michael Grandage's production of Mozart's "Don Giovanni" which I attended with delight, I couldn't help but overhear a man whisper to his wife: "Question is, should we come here next time or maybe purchase the Met's DVD and watch at home?"

And the local opera company didn't seem to be missed at all.
Posted by kransberg-talvi at 8:37 PM

A Day in the Life

Last evening, my husband had been sent the link "A Day in the Life" by David Usui, a young filmmaker from New York City. When I heard strains of J.S. Bach's G Minor Solo Sonata for violin, my curiosity was piqued. Sure enough, I recognized Gregory Singer, a violinist from my childhood years at Meadowmount and Juilliard, now a successful conductor, composer, and owner of Gregory Singer Fine Violins in New York City. Actually, to be more specific, Gregory and his famous movie star actress, cellist twin sister Lori Singer were my first introduction to quartet playing, one hot sticky day at Meadowmount School of Music, Ivan Galamian's prestigious camp. The twins, then aged 12, were coaxed into reading string quartets by their father, Jacques Singer, and a second violinist was needed. Being a newcomer to the camp, and eleven years of age, I was put to task. This was back in 1970. I cannot recollect who the violist might have been, though I believe a veteran camper came to the rescue. But I do recall my sudden panic when faced with sight-reading a Haydn Quartet, my absolute refusal to attempt the first violin part and risk exposure, the easy manner that Gregory and his sister tossed off their parts, and the grimaces, gestures, and utterances by Maestro Jacques Singer, who had pulled up a chair in the corner to "coach". I was informed that the Singer twins were from Portland, Oregon, and that Jacques Singer was the Music Director of Oregon Symphony. When I glanced up from my music to search the maestro's face, his expressions vacillated between rapture and suffering.


"A Day in the Life" offers the viewer a brief but personal glimpse into a normal day for Gregory Singer, founder and director of the Manhattan Symphonie. Jacques Singer, who died from cancer in 1980 about a decade after his contentious dismissal as Music Director from Oregon Symphony (in no small part for seeking to demote the concertmaster, Hugh Ewart, to a position among the first violins) must have held a firm grip on his four children, however supportive a parent he may have been. As Gregory demonstrates a snippet of Bach's Adagio, he confides, "I used to see the violin as something separate. It meant practice. It meant perfection. It meant tension, pressure, and unhappiness. And I see the violin now as a small airplane that transports me to different worlds." Gregory Singer has found his own voice.

It is an ever changing world that we live in. Classical musicians everywhere are seeking audiences in ways different from past. We are encouraged to innovate and re-brand. Yet, the chosen religion for many of us are the great works for all times by the masters, for audiences that have attended concerts with the devotion of congregants. A quote from Jacques Singer in a 1962 interview with the Oregonian: "There is no old music or new. There is only good and the bad music that takes the listener out of himself and gives him something beautiful to think back on when he goes about his own work." These days there is a pervasive, realistic fear that our beautiful art form is vanishing. A mission statement from Manhattan Symphonie states:

This orchestra has the most wonderful spirited musicians, and we are going to show the world that the musicians are the heroes---Watch the music work its magic across the world.
Posted by kransberg-talvi at 8:10 AM 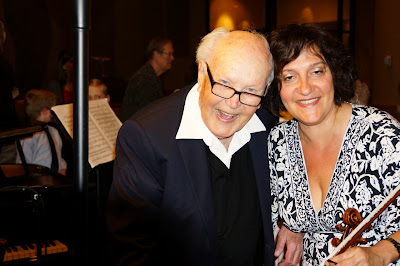 For some people, Queen Anne's Bayview Manor might be simply a retirement community. Not for me. The Manor has become my university; there I study and rehearse regularly with the 97-year-young pianist, Randolph Hokanson. Our initial session, a few months back, was more of a coffee date. I felt the inclination to discuss Randy's life-affirming memoir, With Head to the Music Bent: A Musician's Story. The coffee cups were set on a small table, and a plate of cookies lovingly prepared. I cannot recall the exact moment when I was overtaken by an urge to gobble up every crumb of musical knowledge that Randy had to impart; I just knew that to ingest an interpretive phrase of Brahms from Randy's nimble fingers would be like standing in the presence of Brahms himself, for Randy had worked closely with Carl Friedberg, a pupil of Clara Schumann and friend of Johannes Brahms. I also had tucked away in my music bag the complete set of J.S. Bach Sonatas for Violin and Keyboard, knowing that Harold Samuel, the distinguished interpreter of Bach's music, had also been one of Randy's dearest friends and an influential mentor. I left the Bach piano part on his music stand, just hoping. We exchanged so many thoughts and ideas that day, from the grief Dame Myra Hess felt at the loss of her playing powers to the ravaging attack of jitters violinist Emanuel Zetlin endured prior to every concert at the University of Washington.

"Now what about you?" Randy asked, with a glint in his kind, blue eyes. "How are people going to remember your beautiful playing? You'll be forgotten unless you continue to concertize." And he thought for a moment.
"We must do something about that."
I paused. I had received a phone call from a Hungarian violinist friend in Los Angeles just a few days prior. I couldn't keep from recounting the conversation to Randy, as it was still fresh on my mind.
"This Hungarian friend of mine—he's older, been around the block—calls me first thing in the morning. 'Kransberg'!" he shouts.
"Yeah?" I reply, drowsily.
"You practicing?"
Randy nodded, as if wondering the same. "Well? What did you say?"
"I didn't know what to say. There was a pause, then I heard these words—"
"Kransberg, you want to sound like shit?"
Randy burst out laughing before I realized the language inappropriate. "Hungarians are so warm. You know Marjorie, there's a saying: If you have a Hungarian for a friend you don't need an enemy."

And I suppose that little discussion was a catalyst for the twice weekly rehearsals that Randy and I have enjoyed these past few months. It amazes me to find that whenever we shut the door to study, nothing else seems to matter. It's as if, except for the presence of the great masters and their music, the rest of the world has faded away.

Last evening, we performed a program of J.S. Bach, W.A. Mozart, Johannes Brahms and Maurice Ravel to an enthusiastic, packed multi-generational audience at Bayview Manor's Albertson Hall. I can assure you my friends, it's only the beginning.
Posted by kransberg-talvi at 5:37 PM