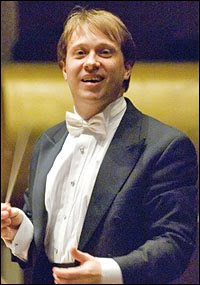 Like many others in town, I learned of Ludovic Morlot's appointment as Music Director Designate of Seattle Symphony beginning this fall through Daniel J. Wakin's feature article in The New York Times. I thought Mr. Wakin was clever to refer back to the local ensemble's enduring era of turbulence and upheaval during the quarter of a century reign under Gerard Schwarz. Mr. Morlot will need to rehabilitate and revitalize a group of disaffected musicians, that's for sure, and jolt the community out of its ennui.

Although I'm unfamiliar with this young French conductor, and have not yet attended a performance of his with Seattle Symphony as yet, I certainly hope he will prove  to be just what this local community has long awaited. Born in Lyons, France, 36-year-old Mr. Morlot studied violin at the University of Montreal and conducting at the Royal Academy of Music in London. He is sought after as a guest conductor, having appeared with Chicago Symphony, Boston Symphony and New York Philharmonic, among a long list of others. Morlot has been recognized as a "leader with a clear beat and precise ear" by New Yorker critic Alex Ross, acclaimed author of the book and blog "The Rest is Noise." Speaking as a violinist, I can appreciate a conductor who has intrinsic knowledge of string playing; articulations and phrasing might, for a change, become more natural and less forced. Wouldn't it be wonderful if an era of dot dash could be replaced with inspired phrasing, natural musicality, and originality?

Of course, the Seattle Symphony, like many other American arts organizations, has a strong desire to establish more of an international presence. A European conductor is often perceived as a catalyst for growth and opportunities abroad, such as touring. But these are troubled economic times, with ticket revenue and corporate donations down, as well as shrunken endowments. Boardrooms tend to be petri dishes for bad behavior. Ludovic Morlot has never had an orchestra of his own thus far, therefore, he will need to prove himself in this local community by cultivating his own pool of followers and donors. Morlot and his family will relocate to Seattle; a local presence might be helpful, although I think it's fair to surmise that every honeymoon period is short-lived, and Seattle has a tradition of dragging its feet when it comes to new leadership.

Music directors of American orchestras must dedicate an inordinate amount of time to fund-raising efforts. And, during this period of slow economic recovery, no matter what Michael Kaiser, the impassioned President of the Kennedy Center and arts organization guru touts in terms of turnaround technique, Morlot is taking the helm of Seattle Symphony at one of the most daunting episodes in recent history. I wish Ludovic Morlot and my colleagues bonne chance. Time is of the essence for a turn around. If there's a slush fund out there for lame-duck conductors, now might be the time to dip into it.

photo of Ludovic Morlot by Maike Schulz 2006
Posted by kransberg-talvi at 12:26 PM No comments:

Sometimes, it takes a reminder for me to recognize my former incarnation as a concert violinist. When I stumbled across this YouTube video, I couldn't believe my ears, for I had forgotten my former self. I'm grateful to the individual who posted the Dohnanyi "Elegy" from the Piano Quintet recorded at the late Waterloo Music Festival in Princeton, New Jersey. My colleagues in this performance were violinist, Leonid Keylin, violist Jean Dane, cellist Eric Bartlett, and pianist David Montgomery.

It is really unfortunate when one person of influence misuses his power to squelch the voices of talented individuals, and tinkers with their livelihoods. There is nothing new to the art of blacklisting. And here, in Seattle, I'm sorry to say, the art form is alive and well. For those colleagues and friends who have reached out to share memories of past events and performances with me, I'm truly grateful. I'll be honest, there have been times when I have felt that it was all for nothing; the hours of practice, the dedication to perfection; the cloistered life. And I have experienced what it feels like to become disoriented from a loss of identity. But when I listen to Elegy, and hear the beauty of Dohnanyi's music, my spirits soar. Hope is rekindled; I love music; this love transcends all else.

My losses in performance opportunities have inspired me to compose a memoir related to my wonderful and rich life as a violinist. I have turned my creative energies into a wholly different art form. Although music is my first passion, I continue to discover the beauty and power of words. It never ceases to amaze me what the human spirit is capable of in the face of adversity. One can find laughter in sorrow.

I reach out to those of you who have met an untimely career death, or unexpected divorce from a world or role that you adored. It is my fervent desire that in the near future, those deserving souls who have been shunned and banished from the arts arena, will enjoy a right of return.
Posted by kransberg-talvi at 7:30 PM No comments:

With summer approaching, and as I reflect back on experiences in my youth, I remember how much of a challenge it was to adapt to the different styles and rigor of learning. As I explained to a lovely adult student last evening, who is making astonishing progress due to her quick analytical skills, there is not one single method, or cure-all that works for everyone, especially when it comes to playing the violin. The best training I received, over the course of my extensive years of study, was the encouragement to make discoveries and experiment on my own.

I recall my first summer at Meadowmount School of Music, "a boot camp for budding virtuosos" and admit that at the age of eleven, I didn't have the slightest clue how to practice. On my music stand was the thick book of Kreutzer Etudes, a crucial but rather dry book. Years later, during studies in the Heifetz Masterclass, the Kreutzer book would be used as a Physician's Desk Reference. For bow tremor, etude number one might be helpful, but in small dosages. A string crossing disturbance could be aided by number thirteen. Shifting ailments were treated by a strong dose of  eleven and twelve. If the fourth finger experienced fatigue or weakness during trills, the eighteenth etude, practiced at regular intervals, would boost endurance and agility. And so on.

Recently, I have been introduced to another excellent resource for the intermediate to advanced learner. It is 12 Etude-Caprices in the Styles of the Great Composers by Meadowmount violinist and faculty member, Amy Barlowe. What I enjoy most about this collection, is that it reinforces practice tools for helping students learn and discover on their own. It is a wonderful complement to the Kreutzer because it doesn't taste like medicine but offers strong efficacy. Each etude-caprice livens the imagination with a focus on the stylistic differences between great composers, such as Sturm and Drang influence in Beethoven, changing meters in Ravel, and characteristics of Slovak folk music in Bartok. Ms. Barlowe includes concise measure for measure technical and musical practice guides, including improving intonation through the "stop bow" method and double-stop strategies.

There are wonderful illustrations and biographies about each composer, as well as chronological correlations with artists, writers, and historic events which encourages the student to contextualize musical styles. Most important, 12 Etude-Caprices in the Styles of the Great Composers is a curative for anyone who needs guidance during practice. I hope Ms. Barlowe might consider adding a piano accompaniment, or optional second violin, so that these etude-caprices can be included in the recital literature.
Posted by kransberg-talvi at 10:57 AM No comments: