The Perilous Life of Symphony Orchestras

If I didn't get much sleep last night, it's because I opened The Perilous Life of Symphony Orchestras, Artistic Triumphs and Economic Challenges by Stanford Emeritus Professor, Robert J. Flanagan, and couldn't put it down. At a time when symphony orchestras and other arts organizations across the globe are  languishing on life support, Flanagan paints a not-too-rosy prognosis for the survival rate of cost disease. "The diagnosis of a symphony's perilous economic life begins with the limited opportunities for ongoing production growth. With the labor required for performances more or less frozen for all time by the composers of the symphonic repertoire, there are few opportunities for orchestras to take advantage of the technical changes that have raised productivity in many other sectors of the economy." 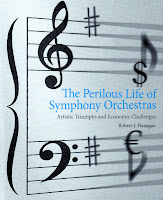 Flanagan's extensive research is a compilation of data from  the largest 50 orchestras in the United States, as provided by the League of American Orchestras and Opera America. The book provides a detailed, yet highly readable examination between orchestras and arts groups in the United States (where there is little direct government support) and their foreign counterparts (where governments typically provide large subsidies).

It's been of interest to me, especially lately, to observe the various methods arts organizations and their leaders employ when coping with financial fragility and peril. In Copenhagen, Denmark, we find Keith Warner, head of Royal Theatre dropping to his knees begging for help to save his chorus. In Louisville, Kentucky, there seems to be confusion between management and players as to what actually constitutes a lock-out or a strike. Louisville Symphony musicians are being forced to repay unemployment benefits they received since June. Dallas Symphony is awash in red ink, and sadly, New York City Opera may be taking its last breath. I discovered another sobering piece on Greg Sandow's blog as he notes the ravages of cost disease and its effect on San Francisco Opera.

I've found myself wondering how the local Seattle music scene is doing currently. We have three major players: Seattle Symphony, Seattle Opera, and Pacific Northwest Ballet. One of the salient points made by Flanagan is that "limitations on the time and money of potential patrons may place performing arts organizations in direct competition with one another." I recall, even from the flush 90's, that these organizations competed against one another for every donated dollar. Local arts curators are maintaining a code of "don't tell" in terms of prognosis here, but I've heard that a lag in fund-raising, coupled with expensive buy-outs for over-valued former principals, is crippling at least one of the three; a collective bargaining agreement is in the process of being re-opened.

Flanagan hits another nail on the head with the maintenance and budgetary balance of pricier venues. For example, Seattle's Benaroya Hall (which is city-owned and opened with great fanfare in 1998 to the tune of 120 million dollars) increased expenditure—many times over—for the local orchestra. That these costs might eventually lead to financial distress should hardly come as a surprise.

Flanagan relays a basic fact that "the number of well-trained musicians seeking positions in symphony orchestras worldwide exceeds the number of positions available." Meanwhile, after a thorough investigation of performance costs and revenue, economic cycles likened to the shifts in climate versus weather changes, the comparison between American private philanthropy and European government subsidies, one recognizes the glaring truth that economic challenges faced by U.S. orchestras are not uniquely American.

"The Perilous Life of Symphony Orchestras" doesn't claim to discover that "silver bullet"—a single solution that eliminates the inherent economic challenges for today's arts organizations, perhaps because there isn't any. This book is recommended reading for anyone interested in this timely topic, but I warn you; it may keep you up at night, tossing and turning.
Posted by kransberg-talvi at 10:58 PM No comments:

A Mozart Moment with Ana

Inspired by this video of Ana Chumachenko's engaging masterclass at Verbier Festival Academy of Mozart Violin Concertos Nos 3, 4 and 5, I've had Mozart on my mind.  Fortunately, I have a crop of talented students eager to immerse themselves in the concertos. There was a time when I wasn't so lucky. For a sad period my students felt Mozart beneath them. I didn't know whether to laugh or cry, beat an egg in a bowl or throw it against the wall. No matter how much I complained and cajoled, I was left with mainly teenagers hungry to pursue only Romantic repertoire, and with attitude, of course. But this has happily changed. I'm looking forward to a Talvi Studio recital in the spring which will feature many of Mozart's compositions.

I'm of the opinion that learning the style of Mozart is best attained in childhood with excellent training. I was fortunate to have had a most wonderful teacher in Sarah Scriven at the Boston Music School. And my mother nourished me with Mozart's music as a steady diet. In fact, she was so eager to have me study the concertos that in 1964 (mind you, I was only five years of age), my mother purchased "A Treatise on the Fundamental Principles of Violin Playing" by Leopold Mozart and gave it to me as a Chanukah present. Although Leopold's treatise didn't impress me then (I preferred Dr. Seuss and Beatrix Potter), to this day I consider the book, first published in 1756, a violinist's Bible. In translator Editha Knocker's introduction, she explains: The great, and I think the most important, difference between Leopold Mozart's teaching and the teaching of our own times is his insistence that each lesson be perfected before the next step is taken. He warns the teacher against letting the pupil play before he knows the rules of playing. He stresses the vital importance of correct bowing, and he gives a sound and logical reason for each rule.

We might easily recognize how it came to be that Wolfgang Amadeus Mozart, admittedly supra-naturally gifted, developed into such a fine violinist by dint of his father's detailed instruction and thorough knowledge of the instrument. Everyone who understands even a little of the art of singing, knows that an even tone is indispensable, Leopold writes in his treatise. After performances of his Concerto in G Major, K.216 in Munich and Augsburg, Mozart wrote his father, anno 1777: I played as though I were the finest fiddler in Europe. It went like oil and everybody praised my beautiful, pure tone.


And purity of tone and stylistic nuance is what violinist Ana Chumachenko, professor at the Hochschule in Musik in Munich and Gold Medalist of the 1963 Carl Flesch International Competition, illumines through her playing and instruction on this Masterclass Media Foundation DVD. Through skillful demonstration, she emphasizes the necessity of economical gestures, quick shifts in character, the translation of technic into a joyful but not aggressive sound, and conscious vibrato as a means to enhance or open the violin's voice as a singer would do. "Play the dynamic of piano so that it fills every corner of the room," she advises one student. Chumachenko possesses an innate sense of musical line, of direction, and shading. "The gestures are too large," she warns young violinist, Ania Filochowska. "It's as if you're trying to move heavy furniture. You must stand quietly and learn what they call—technique. This way you'll develop more and more freedom." Her own outstanding pupils are proof of this credo. Chumachenko's musical progeny include Lisa Batiashvili, Elina Vähälä, Mark Gothoni, Julia Fischer, and Sarah Chang.

After a duration of two hours, the masterclass with Ana Chumachenko at Verbier Festival Academy draws to a close. "How should I phrase in Mozart?" she asks with a gentle smile, as if thinking aloud. "You just have to listen. It's all there in the music. Easy, yeah? Good."

Posted by kransberg-talvi at 1:39 AM No comments: