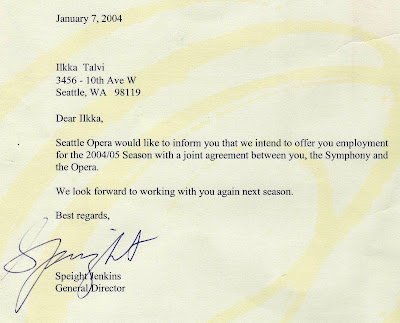 When Seattle Opera's general director, Speight Jenkins, made an impromptu visit at Talvi household in 2004, deeply apologetic and pained by not being able to honor a signed letter of intent (due to SS orchestra's choke-hold on the opera's affairs), he expressed fascination with our teaching of young violinists. "Isn't that difficult?" he asked, with a look of disbelief.

"Yes," I remember thinking. "Teaching violin can be a challenge but it's a labor of love." What I didn't realize at the time of Speight's visit, was that my opinion of music as a profession was slowly evolving, creating inside of me a whole new approach to violin teaching. While I had once conceived of music as a laudable and viable career, my views altered after a series of politically motivated, musical mishaps, including Speight's retraction of employment, which profoundly impacted our family.

Ilkka and I encourage our students to create balance in their lives with an emphasis on broader education and academics. The study of a musical instrument, when tackled in a thoughtful manner, is soul food; nourishment for the brain and senses; a life enhancer. And if one develops the skill of detailed study, as one tends to do with violin playing, the payback can be most rewarding. I'll use one of my friends from Meadowmount, Robert Portney, as an example of what can go right when a well-rounded, talented person is properly nurtured:

Robert Portney claimed first prize in the International Mozart Festival Competition, and due to his aptitude for science and violin, was awarded the Leonard Bernstein Scholarship, full tuition, to study at Harvard, while concertizing extensively. Alongside a fulfilling concert career of many years, Bob Portney is currently geriatric neuropsychiatrist at Harvard Medical School and Massachusetts General. He admits success in both fields proved a challenge, yet he attained his goals in both areas. With medicine, Dr. Portney explains, the quantity of life is extended. But with music, one benefits from quality of life.

You know what I think? The world could use more well-balanced, educated musicians, like Robert Portney. With more like him, perhaps colleagues would stop their petty ways.
Posted by kransberg-talvi at 3:06 PM