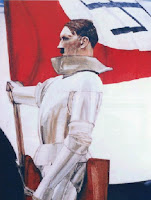 Yesterday, while riding my bike on the Burke-Gilman trail, I bumped into a former violinist colleague, now retired from the SS orchestra. He's a sweet guy, affectionately compared to a "bull in a china shop" by co-workers due to his manner of playing and demeanor.
His first question: How's your mom?
She's dead, I replied.
Oh, when did that happen?
And I reminded him that my mother was killed in 2004.

His next question: Are you and Ilkka still married?
I'm not sure if he was just joking because he laughed, but the question offered me an opportunity to reflect on my marriage, and my good fortune in sharing my life with such a wonderful husband, a deep thinker and soul mate. Contrary to what others might have wished in that former, anti-human workplace, I said, our marriage is stronger and more loving than ever. And yes, I added, we intend to remain in Seattle—(just in case, like others, he was about to ask).

Another question: How's the Northwest Chamber Orchestra?
Gosh, I said. You're really out of the loop. NWCO was silenced a couple of years ago.
Oh yeah, he said. Now I remember.

Final question: You still play?
And I thought of the book Odd Girl Out by Rachel Simmons, an excellent resource for understanding hidden aggression among so called friends and a guide for peeling away phony smiles.
"I guess I'm in a kind of exile," I said.
And then we exchanged pleasantries before going our separate ways.


Later that evening, I finished watching a film worth the seven hours of intense, critical self-examination: Our Hitler by Hans-Jürgen Syberberg. Our Hitler, in the tradition of Wagner's Ring Cycle, is in four parts, and grandiose. Like Richard Wagner, Syberberg distends time and unfolds the narrative in polyphonic style. He layers confessions of Nazi tormentors, and reveals their psychological demons at an excruciatingly slow tempo. The viewer begins to perceive Hitlers and hell everywhere, today and throughout history, from corrupt judges and lawyers to democratically appointed leaders espousing terror. A bone-chilling statement from Himmler: "It is the curse of greatness that its path is strewn with corpses."

Beware of the Hitler substance which outlives Hitler. The substance thrives in power hungry individuals resulting in brainwashed masses and herd mentality. Syberberg's phantasmagoria will resonate with me for a lifetime.

Hitler as Lohengrin
Posted by kransberg-talvi at 2:51 PM