Why was Angela Fuller, the highly gifted violinist from Seattle, denied tenure as concertmaster from Houston Symphony after serving for two years in that post? Did she not play her cards right? I know she's a marvelous musician. Houston Symphony will be searching for a new concertmaster as of next season. Cruel business; denial of tenure can be likened to a stamp of rejection. But Angela Fuller is a young woman, and I'll bet the best years in her career are yet to come. If I remember correctly, Angela was the only Seattle musician invited to join the parade—or shall we call it a charade—of violinists who auditioned for Seattle Symphony concertmaster opening during 2004/05 season, the result of my husband's sudden terminated contract after twenty years.

Personally, I think being slapped with a rejection is tough at any age. But then, how many of us come through this profession unscathed? It seemed obvious years ago to a number of people, including myself, that Gerard Schwarz had someone in mind as concertmaster for Ilkka's replacement. It wasn't tough to read between the lines when I was hired as a substitute immediately following my husband's dismissal. The organization wanted me on their side. If I approved their actions, I'd be for hire like the good old days. If not, they'd teach me a lesson I'd never forget. But I would never play their silly game; my family is my life. What did they hope to accomplish, destroy my marriage?

One of the most memorable occasions following Seattle Symphony's announcement of a concertmaster search occurred during a rehearsal for the gala opening of 2004/05 season. I had the privilege of still being among the sub list in the first violin section. Prior to downbeat, former executive director Paul Meecham strode to the podium for an official announcement in front of the orchestra:
Many people have asked about Ilkka and our future plans for the hiring of a new concertmaster. We will spend this season auditioning prospective concertmasters. We'd like to assure you that your input is integral to our selection process. And Mr. Meecham concluded his speech, while I sat seventh or eighth stand and cried. As he left the podium, those around me stared in silence. I doubt Mr. Meecham knew that he'd fall victim to a process a couple years later. 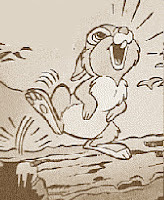 When I received a threatening letter of hostility from my own former workplace last winter, I felt the sting of rejection. Thumper had it in for me after twenty years of service as concertmaster. Maybe he had someone else in mind for my job; I'm familiar with that scenario. But who knows? One day Thumper might be processed and feel the sting. Like I said, cruel business.
Posted by kransberg-talvi at 10:08 PM