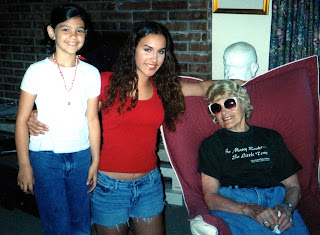 My mother, Frannie Kransberg, almost never missed a Sunday matinee of the Northwest Chamber Orchestra. I'd walk onstage, scan the half-empty hall, and there she'd be, in her usual aisle seat; a fixture. Even at the age of 82, Mom was fiercely independent, insisting on taking buses everywhere from her home in Bothell. She'd flit away the hours prior to concerts shopping for bargains, mostly at The Rack. By the time my mother wound her way to Nordstrom Recital Hall, she'd be loaded up with shopping bags, bundles, she called them. I was tipped off by a concertgoer that Mom innocently whacked the person a row ahead of her in the head with her pocketbook. I suppose my mother got a bit excited at concerts. She'd boast to the person next to her:
See the concertmaster walking onstage? That's my daughter! And do you realize, she's married to Ilkka Talvi, the other concertmaster? And, on top of everything else, they have the world's most beeeautiful daughters—my grandchildren, Anna Mirjam and Sarah Lilian!

At the end of concerts, she'd appear backstage, and make the same comment time and time again. "You look so much better now that the performance is over!"
And I'd think, Gee, I wonder why. Like, it's not pressure having you here?
Then we'd leave the hall, take the elevator down to garage level, and I'd drive her home.
"Our time together," she'd say.

One of Mom's favorite violinists on the planet happened to be Joseph Silverstein, the Principal Guest Conductor of NWCO. My mother remembered Joey Silverstein from her days as an amateur violinist in Harry Ellis Dickson's Brookline Civic Symphony, back in the late fifties, early sixties. Silverstein, during those years, regularly tested out repertoire with community orchestras before solo appearances with Boston Symphony. Understandable and logical. Joseph Silverstein was BSO's young concertmaster, and took the role seriously, practicing (according to my mother) his violin right up until the last second before entering the stage. I noticed whenever my mother spoke of Mr. Silverstein, she'd lower her voice, and lift her eyes heavenwards.
"His tone is like the finest wine," she'd say.

So, the Sunday concert on November 14th, 2004 was penciled in my mom's calendar. Silverstein was slated to conduct with Mark O'Connor as soloist. But there was a problem. And the problem was NWCO sold out that entire weekend, due to Mark O'Connor's popularity.
"I'm sorry, Mom," I said. "No more tickets."
Secretly, I felt a little relieved. I mean, I loved having my mother in the audience but let's face it, I was a little concerned about what she might say or do.
Once the concert finished, I walked to my car, and realized I felt lonely. I missed my mom that day, November 14th. I missed her so much that I called her house as soon as I drove from the Benaroya Garage. It was 4:44 on the dot. The phone rang and rang: no answer. If she wasn't at my concert, then where was she?

I found out two hours later. True to Mom's character, she had taken a bus to and from the grocery store, her cart loaded with bundles. Mom was probably tired and hungry. She must have missed hearing the NWCO. I wouldn't be surprised if her thoughts were music-related, envisioning my performance. She certainly didn't sense the car coming. And the driver didn't see my mother. Time of fatal accident: 4:44.
Posted by kransberg-talvi at 1:27 PM