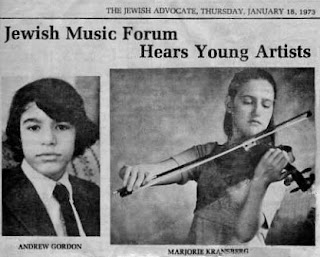 One of my Frantic readers recommended the book, "Forbidden Childhood" to me by pianist Ruth Slenczyska. He had stumbled across my blog and recognized similarities to Slenczynska's memoir. As it turns out, my reader friend (pianist Andrew Gordon) and I shared concerts together as children growing up outside the Boston area. Oddly enough, I remember warming up backstage for a Jewish Music Forum event, my usual edgy teen-aged self; thirteen-year-old Andrew didn't say a word but just stared blankly while drumming his fingers on his lap. I imagine that I must have paced back and forth in my normal pre-concert jittery style, wiping my sweaty palms on my short skirt before entering the stage to perform an entire Jewish program. My mother had carefully selected the repertoire, excavating all the Jewish composers she could find, including William Kroll. To her, Mendelssohn qualified as a Jew even if his family had been converted and Kreisler also, so "Song Without Words" would have made the grade. "Was Wieniawski really Jewish?" I recall my mother asking while flipping relentlessly through "The Oxford Companion to Music". She discovered that Wieniawski's family, too, had converted to Catholicism. Finally, she settled on Joseph Achron's "Hebrew Melody"as a complement to Kroll's "Banjo and Fiddle". Besides, as young Andrew Gordon was to perform Achron's "Children's Suite" based on cantorial chant for the event, her daughter wasn't to be outdone.

I remember wondering how he—Andrew Gordon—exhibited such calm prior to performance. "I get nervous," I might have blurted while practicing backstage. I'm not sure whether I just kept the thought to myself or said it out loud. Alas—forty years—through the amazing internet, Andrew and I have found one another; our e-mail exchanges spill over with anecdotes from the past; words that were stifled in his youth fill the computer screen, including nuanced tales of a particular female teacher who wore too much make-up, sported mini skirts which emphasized her varicose veins, and coddled him like a baby. And it was this teacher who happened to share passages of Ruth Slenczynska's breath-taking memoir with Andrew.


In "Forbidden Childhood" American pianist Ruth Slenczyska (born 1925 in Sacramento) recounts how her father, Josef Slenczynska, a failed violinist took one look at her hands when she was just two hours old and burst into tears.
"Look at those sturdy wrists!" he said between sobs. "Notice the way her thumb is separate from the rest of her hand! Look at the tip of her fingers! I swear to you, Mamma, that's a musician!"
Josef Slenczynska demanded that his daughter practice nine hours daily from the age of four, firing one teacher after the next. Ruth Slenczynska studied with a whole galaxy of legendary pianists: Artur Schnabel, Alfred Cortot, Egon Petri, Josef Hofmann, Nadia Boulanger, and Sergei Rachmaninoff.  She made her Berlin debut at the age of six, and performed her full debut in Paris when only eleven years old. By age fifteen, after a shattering emotional crisis which points to her abusive father, she withdrew from the concert stage. Ruth reflects,"Some such turning point arrives in the life of every child prodigy: the day when allowances cease to be made on grounds of youth; the time for reappraisal; the need for readjusting to new values." Fortunately for the musical world, Ruth Slenczynska found her way back into teaching and performing; her wit, miraculously, in tact. Most Wunderkinder have been less fortunate.

From personal experience, those I've known appear haunted, or sometimes almost deranged, by the ghost of the never satisfied stage parent.  As an Interlochen alumni, I found this clip of There's Magic in Music (1941) positively enchanting. Much of the movie was filmed on location at National Music Camp. Towards the end of this scene, however, a cameo appearance by violin prodigy Heimo Haitto captivates my attention. In the film Haitto describes himself as a Finnish refugee. It dawns on me that Ilkka has mentioned Haitto's name several times over the years with a mixture of disbelief and compassion. It is documented that during the Russo-Finnish War, Heimo Haitto was sent away by his parents, along with his teacher, Boris Sirpo, to America. But it remains sketchy as to the abuses he suffered by an exploitative entourage. I click on this YouTube performance and my heart melts with the staggering beauty of Sibelius "Serenade" as played by Haitto and the Finnish Radio Orchestra. I scroll down and view a concert from later years. It's one thing to listen to a young boy full of promise, yet another to witness a broken down, aged fiddle player. There is a far away look in Haitto's eyes; as if a flame is about to extinguish. Heimo Haitto's personal struggle was a journey from a forbidden childhood to an almost forgotten life.
Posted by kransberg-talvi at 6:46 AM