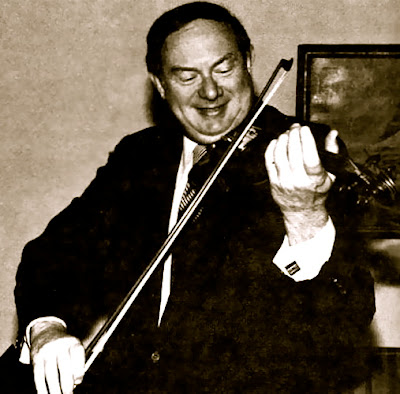 To colleagues and students, his name might have been Sidney Heart. After learning of the death of violinist and conductor Sidney Harth, I recall with fondness his years as Music Director of the Northwest Chamber Orchestra during the late 80's and early 90's. Initially, I felt a certain amount of apprehension at his appointment; I was, after all, a relatively young concertmaster; it may have been somewhat intimidating to have had a preeminent violinist loom in front of me on the podium. Similar in physique to the Belgian violinist Eugène Ysaÿe, Harth could pick up his violin and make everyone around him appear as inadequate students. But he never demeaned or belittled any one of his colleagues. What I sensed while working with Sidney over the years was a man of limitless understanding, a paternal figure willing, at any moment, to encourage and support a friend, student or colleague.

True to Sidney Harth's generous character, he offered me a solo opportunity every year with the chamber orchestra, though, I'm sure if he had wished, he could have performed the entire violin repertoire season after season. But I remember how he insisted that a concertmaster must enjoy first dibs at solo opportunities; at least Sidney had over the years in his capacity as leader of the Louisville Orchestra, Chicago Symphony under Fritz Reiner, Puerto Rico Music Festival with Pablo Casals, and Los Angeles Philharmonic under Zubin Mehta. And he wanted nothing more than for me to choose any piece I desired to perform. It was as fun for him to conduct the accompaniment as it was for me to play solo.

An unforgettable highlight in my career was the collaboration with Sidney in the double concertos of Bach and Vivaldi. On one such occasion, Sidney playing first violin, took the final movement of the Vivaldi hair-raisingly fast. The movement gathered furious momentum after the opening, and nearly derailed. We concluded the performance and headed backstage. I didn't feel comfortable critiquing the maestro but knew we had to settle the tempo before the repeat performance on the following day.
"Gee, it felt a bit f-f-fast," I found myself announcing, as my heart rate finally returned to normal.
He looked at me in earnest. "Tell me, Marge. Honey, did I rush a little?"
"A little?" I asked.
"At rehearsals too? Because I know that's my tendency—"
I nodded.
"Now listen," Sidney said. "If ever do that again, you tell me! I need to be reminded, that's all."
I laughed.
"No, really. Don't wait till the concert. Just say, Sid, it's time to practice with the metronome—and you know, Marge, I'll do it!"

Often after our Northwest Chamber Orchestra concerts, my mother would visit backstage to congratulate the artists. I got a little nervous as she insisted on meeting Sidney Harth in his dressing room. One never knew what my mother might say! She introduced herself to Sidney. He threw his arms around her, the  inimitable bear hug of his; it was the sort of hug that leaves you gasping for air. The next thing I knew the two of them were rattling away in Yiddish. "I get so much nakhes from your mother," he was to tell me many times over. "She's the dearest person, and her Yiddish is beautiful. And what's more—because I heartily countered every one of his assessments—she brought you into this world!"

During his formidable career, Sidney Harth won the Naumberg Award in 1949 and was the first American to take the Second Prize at the Wieniawski Competition in 1957. His guest appearances included engagements with symphony orchestras of New York, Boston, Chicago, Cleveland, Warsaw, and Brussels, under such conductors as Reiner, Ormandy, Leinsdorf, Barbirolli, Steinberg and Mehta. At the time of his death, Mr. Harth was director of orchestral studies at Duquesne University. He had been professor and chairman of the Carnegie Mellon University from 1963-73. He also served on the faculty of the Yale School of Music. For a wonderful glimpse into his pedagogy, I recommend the book: "The Way They Play" by Samuel Applebaum and Henry Roth. He is featured in Book Five of the series.


Photo of Sidney Harth from "The Way They Play"
Posted by kransberg-talvi at 3:45 PM