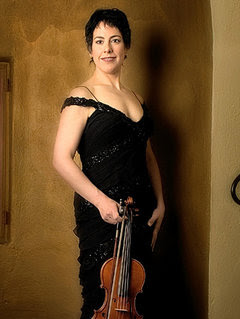 Dylana Jenson's new release of the Shostakovich and Barber Violin Concertos has been entered for a Grammy nomination. I've been inspired by Dylana Jenson's violin playing since the early 70's, as a child growing up in the suburbs of Boston, where I first began music studies. Dylana had such reknown as a child prodigy, that sometimes after my own concerts, audience members would rush to congratulate me, and say how much they enjoyed my appearances on "The Tonight Show". Finally, it became so awkward and uncomfortable for me to clarify that a). The young violinist was not me but another child violinist, Dylana Jenson, and b). Her career had sky-rocketed, and I was still working my way up. I left well enough alone. We were both young female violinists with dark hair and brown eyes. I accepted any praise and acknowledgement meant for her.

Our paths crossed briefly in the mid-70's, when I relocated for studies with Jascha Heifetz in Los Angeles. My parents, determined to have me meet this young lady at last, telephoned her family in Sherman Oaks, and they invited us for a visit. What a warm reception we were granted by the entire family, I'll never forget. But, as I was urged to take out my violin, and prove my worth, I was gripped by stage fright. I cannot recall what I served up that evening. I do remember that Dylana opened her violin case and nonchalantly played for us, unaware of the pressure cooker scenario. The music seemed to pour from her soul right into her fingers. I was envious, but at the same time, inspired.

Years later our paths met again. But this time, I was a newly elected section player of the Los Angeles Chamber Orchestra, and she was the star soloist performing Samuel Barber's Violin Concerto. The orchestra  admired her playing, so expressive and masterful. In those days I had been borrowing a Carl Becker violin, but was ordered to return the loaned instrument after being hired by LACO. Fair enough. But it never occurred to me that Dylana Jenson had to return the 1743 Guarnerius del Gesu (that was on loan to her by the same collector) for the reason that she got married, at age twenty-one to conductor, David Lockington.  Dylana tells her story here in a captivating interview on violinist.com with Laurie Niles.

I love this recent release of the Shostakovich and Barber Violin Concertos. Jenson displays her keen sense of dramatic intensity and fiery command in both concertos with London Symphony Orchestra conducted by David Lockington. She is an impassioned violinist who displays rich, tonal beauty and shows remarkable instinct for stylistic nuance. The haunting, pervasive anguish in Shostakovich's music paired with the lyrical and velvety Barber (with its hair-raising finale) demonstrate the triumph of a one-of-a-kind violinist, the owner of a  signature sound and breathtakingly flawless technique. Dylana Jenson has my vote.
Posted by kransberg-talvi at 10:01 PM