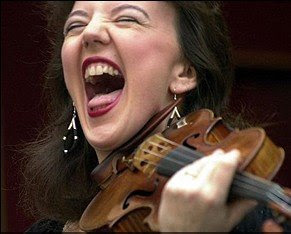 After reading this article and following reports of arts organizations collapsing everywhere due to the economic crisis, I've made a decision to devote the ensuing months to making the rounds in the intensive care unit known as the arts, and charting my observations on this blog. I want to find out just what makes audiences tick, and compare the various strategies employed by marketers during a recession. So, I suppose this is a first installment in a series of critical reviews.

I began with a venture to a former haunt: the Seattle Symphony at Benaroya Hall. The program featured English violinist Tasmin Little in the Elgar Violin Concerto. Little is a charismatic performer who is dedicated to the mission of bringing classical music to the masses. Her album, The Naked Violin, received the Classic FM Award for Audience Innovation at the 2008 Gramophone Awards. Ms. Little embraced the internet and offered up a free down loadable recital of solo violin works on her website; the catchword naked alluding to unaccompanied works of Bach and Ysaye. She has followed up "The Naked Violin" project with "Partners in Time"—a disc of works for violin and piano illustrating the chronological development of composers and their fondness for the two instruments. Ms. Little's photo gallery shows her in beguiling poses, and she definitely falls into the category of eye candy.

One seldom hears a live performance of the Elgar. It's a long song, as they say in the biz; a song that tends to meander. The concerto was dedicated to Fritz Kreisler. The recording of Heifetz is, in my opinion, unparalleled. Paired with Dvorak's rarely performed Symphony #6, I wondered if this particular concert might prove a beneficial sleep aid. Based on the number of empty seats, I'm guessing the program was not a hot sell. I watched as the orchestra musicians strolled on stage, the ensemble as a whole appearing a bit glum. But I was captivated by the guest associate concertmaster, Angela Fuller, who took obvious delight in the music and conveyed a sense of vitality.

Tasmin Little gave a poised account of the Elgar. The broad range of dynamics proved helpful to the lengthy composition. She has a penetrating sound, and communicates a natural ease with the orchestra and audience. I was somewhat distracted by Little's ever-present, wobbly vibrato throughout the work, most noticeable at the beginning of the concerto.

At the intermission, not wishing to leave my seat, I couldn't help but hear the couple from a row behind:
He: Didn't grab me—how about you?
She: Well, it was pretty. Pretty stuff.
He: Was there an actual theme?

The second half of the concert featured the Dvorak Sixth. To paraphrase a past(?) local critic, the orchestra and conductor dispatched a reading of the writing.
photo of Tasmin Little from telegraph.co.uk
Posted by kransberg-talvi at 4:38 PM