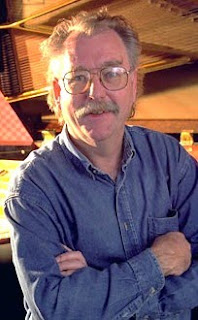 Like many others, I learned of the tragic death of Orchestra Seattle and Seattle Chamber Singers music director, George Shangrow, through an internet discussion on Facebook. Reading the horrible news about one of Seattle's most gifted, but least valued artists, killed at the age of 59 is shocking and saddening, to say the least. Shangrow, former host of "Live by George" for KING-FM, was en route to deliver a pre-concert lecture on American classical music for the Methow Valley Chamber Music Festival, when a teenager lost control of his vehicle on Highway 20, due to a thundering rainstorm, and swerved across the center line which resulted in a head-on collision. The teen driver received injuries to his ankle and collar-bone; Shangrow was pronounced dead on the scene. His family was notified after the news hit the media.

I had the pleasure of working with George Shangrow on many occasions, both as a frequent guest on "Live by George," and as soloist and chamber music partner with Northwest Chamber Orchestra and Orchestra Seattle. George was such a great musician and intuitive accompanist that when I performed the Beethoven Violin Concerto with Orchestra Seattle in 2003, I sensed that we were on the same wave-length. And I had drawn a similar conclusion when we performed J.S.Bach's "Concerto in d minor" with the now defunct Northwest Chamber Orchestra, as well as a complete program devoted to the Bach family at Volunteer Park.

George Shangrow loved, and deserved to work with professional orchestras in this community, but he was given precious few opportunities around here for some dubious reason. I remember George telling me, after directing NWCO, that to conduct a professional ensemble was like driving a fine automobile. Indeed, I knew what he meant.

About a month ago, I was returning home from a day in Portland with my daughters Anna and Sarah. We were desperate for music, as my Eurovan is lacking a CD player, and the antennae is broken, which means, no radio either. Anna reached into a long forgotten pile of cassettes, and fed a mystery tape into the player. The charismatic and gracious voice of George Shangrow introducing pianist Dianne Chilgren and me as guests on his show to perform "Introduction and Rondo Capriccioso" brought back a host of memories. I was introduced as concertmaster for this and that, which I am no longer, and as artistic director for a series which has been long gone as the orchestra is now dead, by a multi-talented, extraordinary radio host that was shamelessly ousted by KING-FM. I switched off the radio station from that day on. The arts community had, once again, tried to silence a Seattle musical treasure who had brought classical music into so many households, and made it accessible for all.

George, you will be forever missed. Thank you for sharing your love and immense musical talent with all of us.
Posted by kransberg-talvi at 12:40 PM